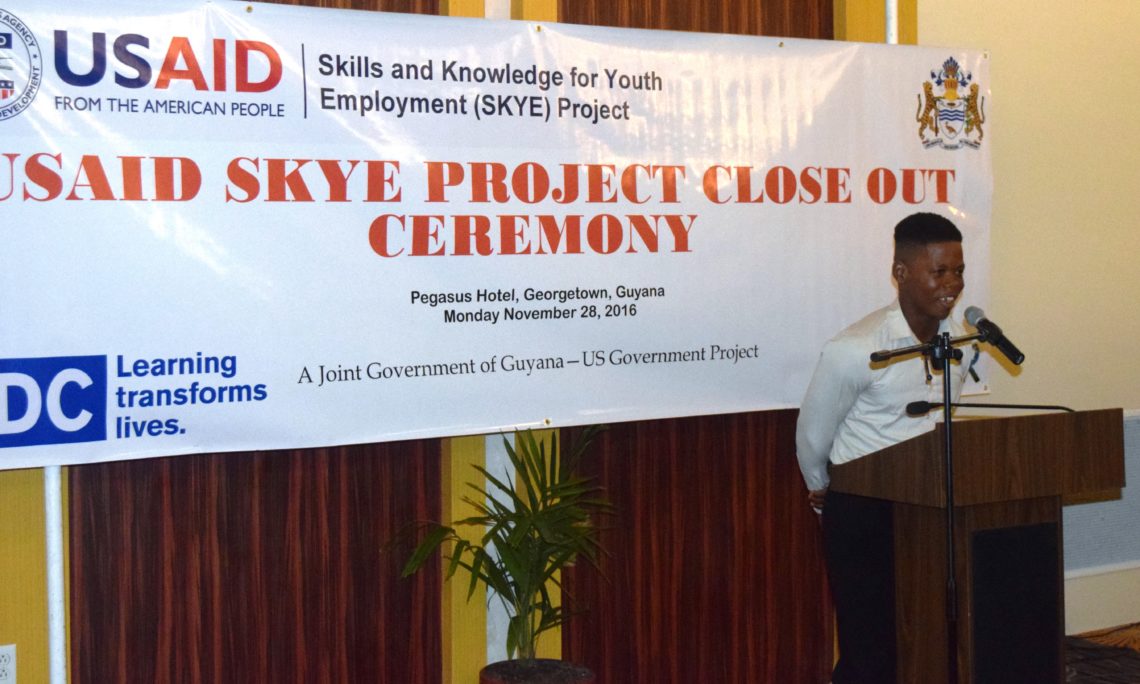 SKYE Youth Andrew McGregor Talks About Benefits of the Program

U.S. Ambassador Perry Holloway joined Government of Guyana Presidential Advisor Aubrey Norton, and other key stakeholders, to recognize the successes of the United States Agency for International Development (USAID)-funded Skills and Knowledge for Youth Employment (SKYE) Project, and mark the conclusion of the program.

In delivering the feature address, Ambassador Holloway lauded the SKYE program, which has become synonymous with affecting change in the lives of at-risk Guyanese youth and for its role in “creating opportunities for those who need it most.”  Since its inception in 2011, SKYE has invested over $7M US dollars in the youth of Guyana.  Through extensive collaboration with the private sector, government, and the NGO community, the program improved and expanded training and life skills education for over 2,200 youth.

“The delivery of appropriate curricula positively impacted youth and helped them to transition successfully to adulthood and lead more productive lives.  More than 1,000 of these youth are now linked to full-time employment.  Over 300 young men and women received entrepreneurship training, and 160 received grants and started micro-businesses.  More than 230 youth received primary level literacy training, greatly expanding their employment opportunities,” he added.

Ambassador Holloway also recognized the outstanding work done in partnership with Guyana’s juvenile justice system, which has resulted in the expansion of alternative sentences to support the rehabilitation of over 120 youth who committed minor offenses.  “We are heartened by the Government of Guyana’s desire to modernize the system and I hope that when the new juvenile justice legislation is reviewed, finalized, and eventually operationalized, that the lessons learned are carefully considered to expand the use of alternatives to sentencing to build a less punitive juvenile justice system.”

Recognizing that over fifty percent of the Guyanese population is under the age of 35, the Ambassador stated that the United States Government remains “committed to improving citizens’ security and supporting youth development in Guyana in creative and impactful ways.”