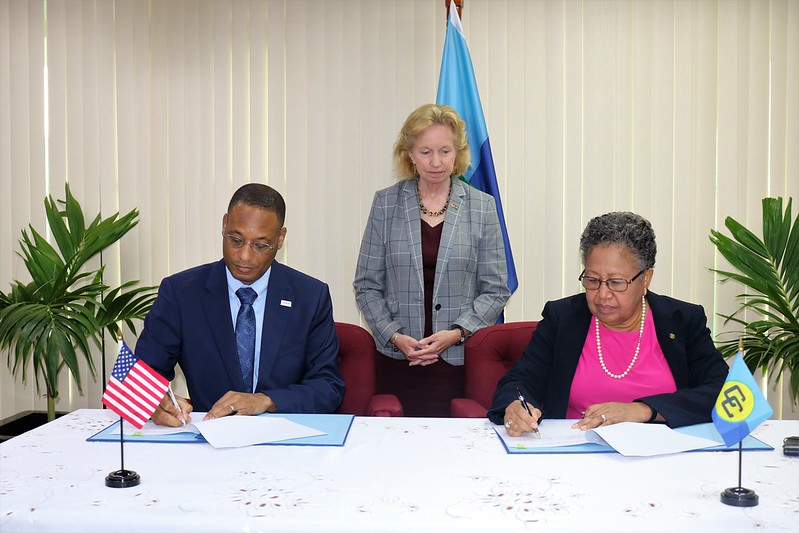 The funding also includes US$10 million to combat food insecurity in the Caribbean to support priority areas identified by CARICOM under President Biden’s Caribbean Zero Hunger Plan.  The announcement coincides with the joint USAID and Caribbean Community (CARICOM) annual review of mutual objectives and priorities concluded on September 1st.

“The annual review speaks to the importance of CARICOM as a strategic partner on development issues and how highly the United States values the CARICOM and member states commitment to democracy in the Caribbean region,” U.S. Ambassador to Guyana, Sarah-Ann Lynch said.

Ambassador Lynch noted several of the same issues, namely, energy, food security, and finance were raised at the Summit of the Americas, and global climate concerns also were discussed at the Partnership to Address the Climate Crisis 2030.

CARICOM Deputy Secretary General, Dr. Armstrong Alexis, remarked that “CARICOM is pleased to have USAID as a partner. USAID’s support for the CARICOM 25 by 2025 agenda is an important step to achieving food security in the region and building a stronger and more vibrant Caribbean for all. “

USAID Regional Representative for the Eastern and Southern Caribbean, Clinton D. White, reaffirmed USAIDs commitment to long term development, economic recovery, and support to climate change, and food security through this signing of our amended agreement.  He also noted how the CARICOM Secretariat and USAID’s partnership will continue to prioritize the prosperity of the Caribbean and its people.

White, speaking at the annual portfolio review said, “The only way that we can achieve our objectives and goals is through a more inclusive development approach.  That is why USAID and the CARICOM Secretariat value these engagements to continuously evaluate needs, priorities, and remind ourselves of our moral obligations to achieve locally led regional goals.”