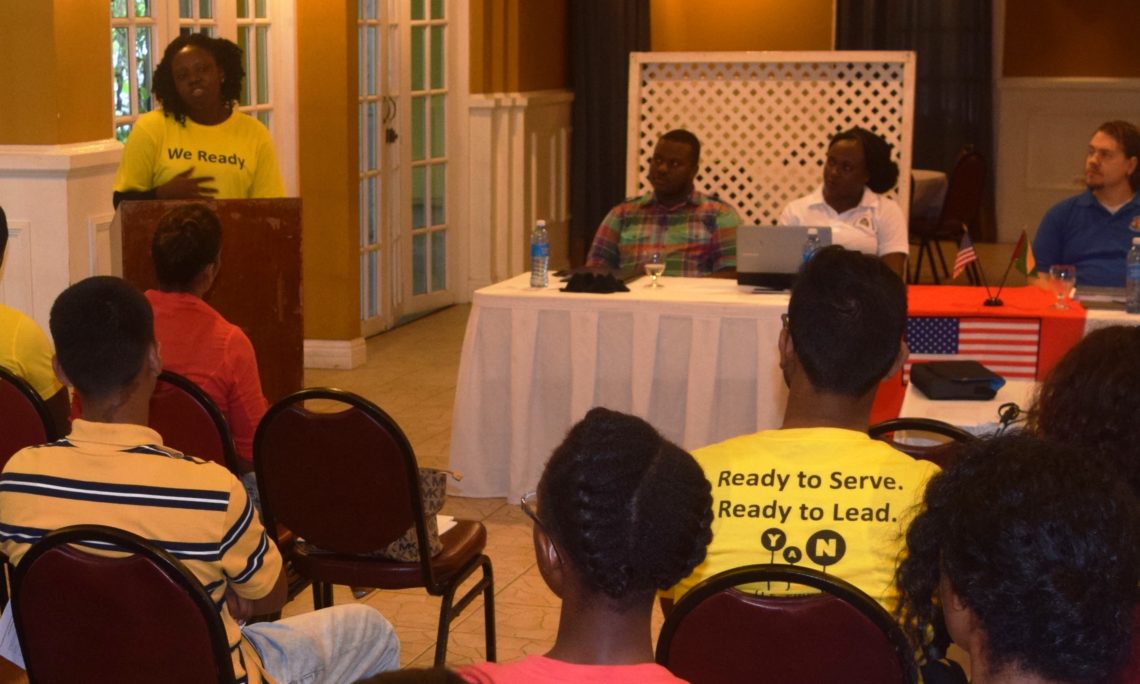 A YAN Member shares a poem on TIP

GEORGETOWN–The U.S Embassy’s Youth Action Network, in collaboration with the Anti –Trafficking in Persons (TIP) Unit of the Ministry of Social Protection, sponsored its first public forum on TIP at the Georgetown Club.  This event attracted over forty people and educated participants on the definition of TIP, and how all citizens can actively be involved in the fight against it.

Speakers included the Political/ Economic Chief of the United States Embassy, James Bjorkman, as well as the Head of the Anti-TIP unit of the Ministry of Social Protection, Tanisha Williams- Corbin.  Bjorkman spoke about human trafficking worldwide, and further discussed Guyana’s positive strides over the years towards fighting this form of modern day slavery.  Williams- Corbin provided a detailed overview of the actions the Ministry is taking to inform the public, in particular primary and secondary school students, about the types of trafficking and how citizens can help to alleviate the situation.  Methods were explained on how to identify plain and hidden cases of trafficking and actions that can be taken to have the relevant law enforcement and government authorities intercept.  Both speakers emphatically made the points, “if you see something, say something,” and that anyone can be a victim of trafficking-in-persons.

President of the U.S Embassy’s Youth Action Network, Kadeem Gordon, applauded the Guyanese Government’s efforts over the years, but strongly suggested there be an increased police presence in rural areas where trafficking is often viewed as underreported and underinvestigated.  Gordon further encouraged the youth in the audience to pursue careers in human and social development and to be active in the design and implementation of more effective strategies in the fight against human trafficking.

The Youth Action Network, created in November 2013, under the theme of “Ready to Serve, Ready to Lead,” actively works in the community with Guyanese youths to enhance their leadership and advocacy skills, professionalism, and increase social awareness of issues including, but not limited to, trafficking in persons, suicide prevention, the environment, gender-based violence, and Lesbian, Gay, Bisexual and Transgender (LGBT) rights.