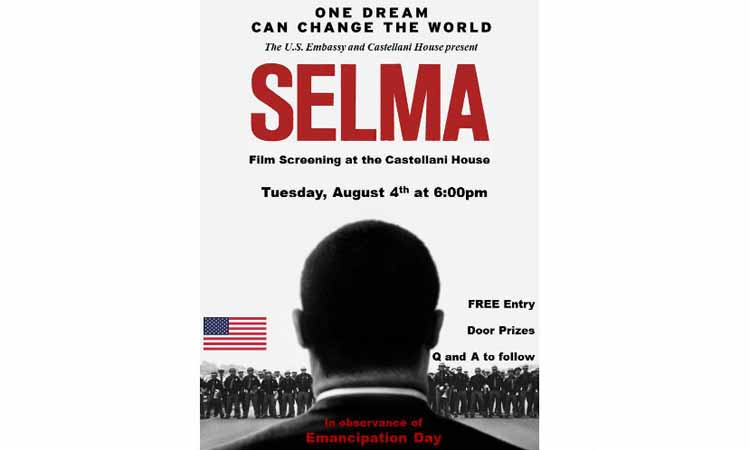 The U.S. Embassy and the Castellani House have organized a Film Screening as Guyana observes Emancipation Day on August 1st.Selma, a critically acclaimed film about the civil rights movement in the United States will be shown at the Castellani House. Guyana and the United States share a common bond in the struggle for freedom. In Guyana, the Slavery Abolition Act 1833 ended slavery in the British Empire on August 1, 1834 and Emancipation Day is celebrated annually on August 1 in observance of the abolition of slavery. In the United States, President Abraham Lincoln signed the Emancipation Proclamation on January 1, 1863, as the nation approached its third year of bloody civil war. The proclamation declared “that all persons held as slaves” within the rebellious states “are, and henceforward shall be free.” While slavery no longer exists in both of our great nations, the struggle for equality and civil rights for all racial, ethnic, and gender groups continues.

The film, set in the U.S. in the turbulent 1960’s, depicts true events that ring true today in the civil rights movement. Although the Civil Rights Act of 1964 legally desegregated the South, discrimination was still rampant in certain areas, making it very difficult for blacks to register to vote. The film chronicles the tumultuous three-month period in 1965, when Dr. Martin Luther King, Jr. and his followers, despite violent opposition, pressed forward on an epic march from Selma to Montgomery, and their efforts culminated in President Lyndon Johnson signing the Voting Rights Act of 1965.