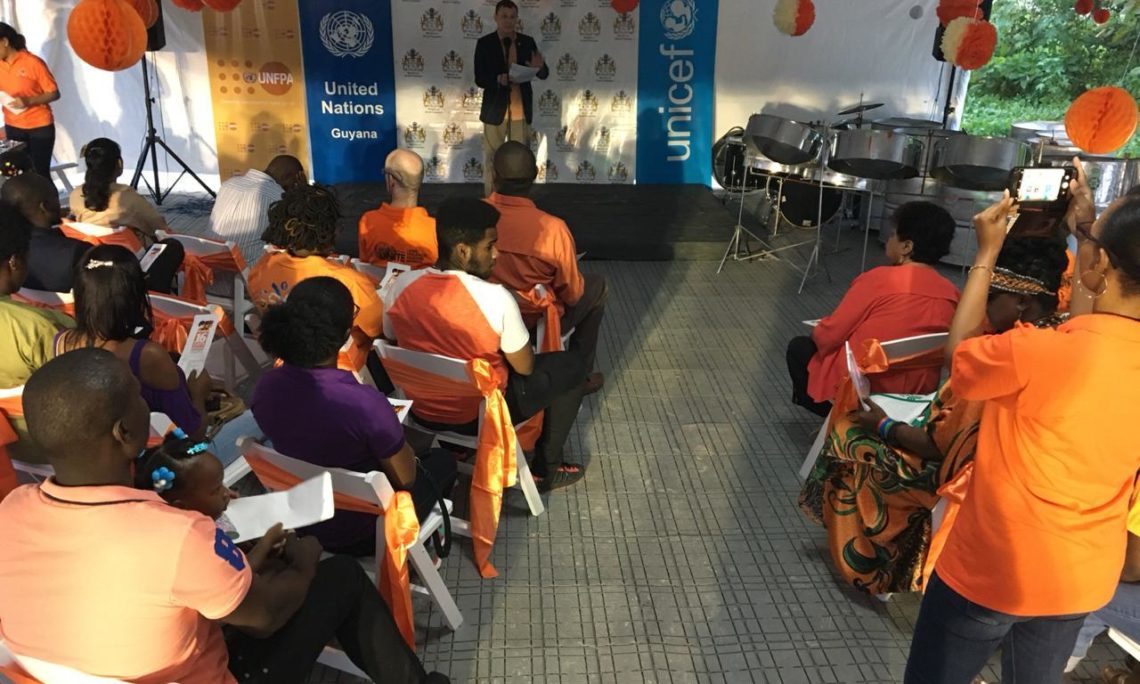 Deputy Chief of Mission Terry Steers-Gonzalez speaking at the launch of 16 Days of Activism against Gender Based Violence.

As we stand together with the global community to mark the International Day for the Elimination of Violence Against Women and the 16 Days of Activism Against Gender-Based Violence, I am heartened by the actions of all of you gathered here, who work on one of the most widespread and pervasive issues of our time.  The figures are sobering –

And as the #Me Too movement revealed, work place harassment and discrimination prevails seemingly everywhere.

Closer to home, the Caribbean experiences high levels of sexual and domestic violence, which are often under reported and inadequately addressed through the justice and law enforcement sectors.  In Guyana, domestic violence is one of the most prevalent forms of abuse.  At least 1 in 3 women in Guyana is a victim of gender-based violence, and more than 58% of child abuse cases are of girls.

Women and girls still face many gender-related barriers despite the growing number of Guyanese women actively participating in the economy and while female students outnumber males at the tertiary education-level.  The root causes that underlie these issues span the social, economic, cultural and political spheres.  Addressing these issues involves a combined effort across countries, using all available tools from law enforcement to education and population sensitization.

In recent years, there have been several successful efforts at highlighting these issues and taking action to address them.  Guyana’s Domestic Violence Act of 1996 is a significant piece of legislation that has provided an avenue for recourse to survivors of domestic violence.

Guyana is one of the first countries in the region to set up a court dedicated to hearing cases on sexual offenses.  I commend the Ministry of Social Protection for setting up the Victim Support Unit.  This unit, with the collaboration of non-governmental organizations, extends support to survivors of sexual violence through psychosocial support and trauma counselling and helps them prepare for court proceedings.

The U.S. Government has and continues to support many of these efforts.  In a recently-concluded project, the U.S. Embassy partnered with a local non-governmental organization to work with communities in the East Coast and West Bank Demerara, Anna Regina, and Bartica to increase awareness about gender-based violence and focus on interrupting the cycle of violence.  As a result, some of these communities have set up community support monitoring units to engage with victims of domestic and sexual violence.  I am particularly pleased to hear about the all-male support group in Anna Regina because men’s involvement in these efforts is essential.  Also, it should be noted that men can be victims themselves, but the prevailing numbers indicate that women are most often the targets of sexual violence.

It is fitting that this period of activism concludes 16 days from now on International Human Rights Day.  There is no better time to gather together, make a call for accountability, and take collective action to end impunity and ensure human rights for all.

In closing, I would like to extend my sincere wishes to all of you in your work during this period of activism.  The U.S. Embassy looks forward to supporting your efforts. Thank you.