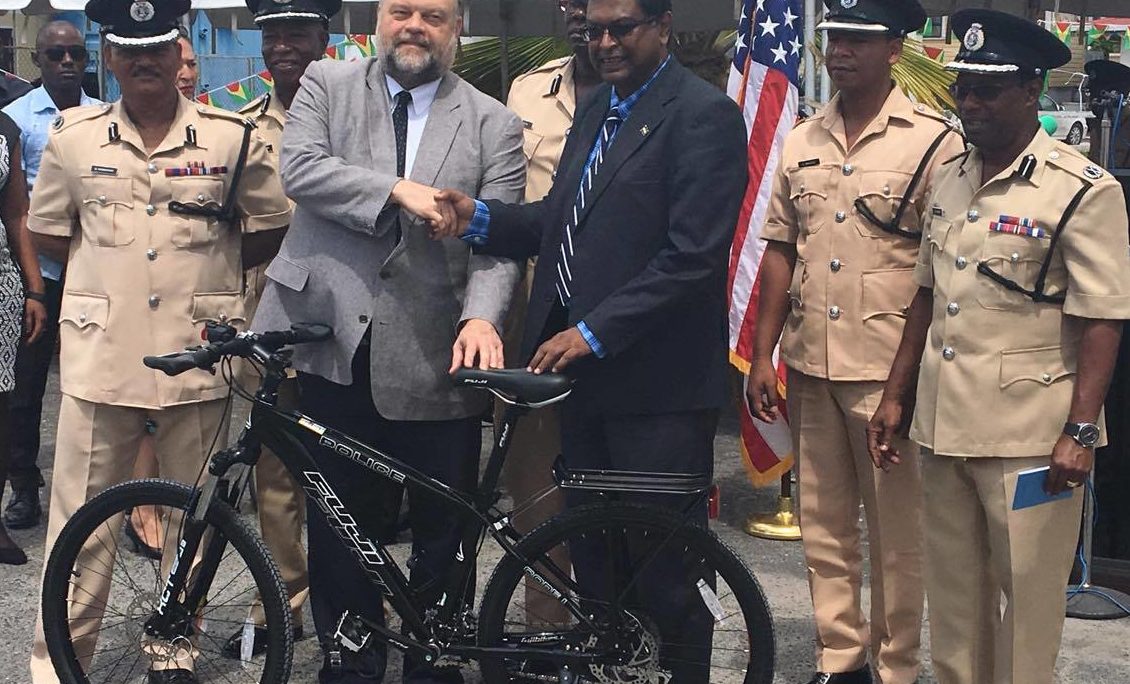 The United States Department of State through the Bureau of International Narcotics and Law Enforcement (INL) assists countries around the world in strengthening the capacity of their law enforcement and supports their efforts to promote the rule of law. On behalf of INL, I am delighted to be here today to underscore the United States’ ongoing commitment to promoting community policing in Guyana through the handover of 200 bicycles and accessories to the Guyana Police Force (GPF) and the Georgetown City Constabulary.  This is a donation worth over US$145,000.

The 200 bicycles – of which 170 will go to the GPF and 30 to the City Constabulary – are the latest in the U.S. Government’s efforts to support Guyana’s Community Outreach Program, which declares all members of Guyanese law enforcement to also be community police officers.

Already, the U.S. Government has provided training to 12 officers of the GPF and City Constabulary through a police cycling training that took place with the Las Vegas Metropolitan Police Department (LVMPD) in Las Vegas, Nevada, November 28-December 2, 2016.

The 12 officers that attended the training were exposed to practical and classroom exercises on how to ride safely and comfortably in traffic. They were taught enhanced riding skills and given the opportunity to practice in diverse traffic conditions to ensure officers could employ techniques to keep themselves safe and free from accidents while traversing public roads.  The officers were also taught defensive tactics to use while on patrol and how to best maintain and repair their equipment.  Most importantly, all twelve officers were trained to become trainers so members of the police force could take an active role in institutionalizing their experience and helping the program grow.

With their help, these bicycles will increase the visibility of police officers; the contact they have with their communities; and, the trust Guyanese citizens build with the police force. By allowing officers to move quickly through crowds, bicycle units will increase safety at public events and facilitate patrolling capabilities.  Furthermore, by providing a cleaner transportation alternative, these police officers will also play an active role in building not just a safer, but a greener Guyana.

I look forward to seeing how this project develops. The U.S. Embassy in Guyana and INL remain committed to seeing this program succeed and will continue to find more opportunities to provide training, advisory services, materials, and technical support to the Government of Guyana aimed at strengthening law enforcement.