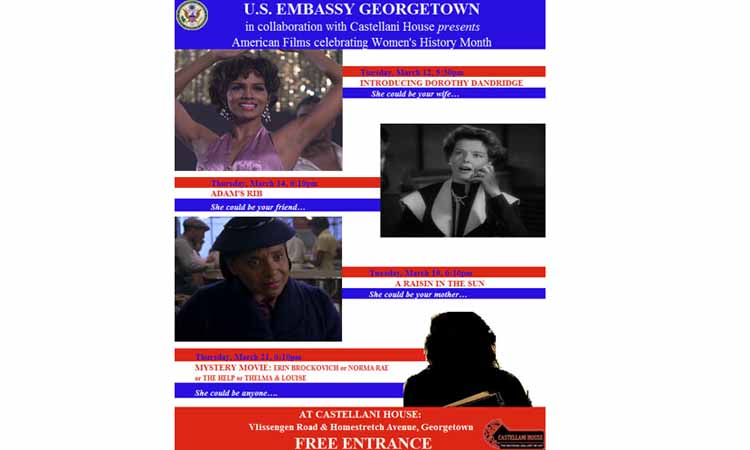 The U.S. Embassy and the Castellani House have organized a Women’s Film Series at the Castellani House to mark the celebration of International Women’s Day and Women’s History Month. The four day film series will see three selected films for the first three days, and an audience chosen film for the fourth and final day.

This made-for-cable biographical drama stars Halle Berry as Dorothy Dandridge, supported by Brent Spiner, Obba Babatunde, and Klaus Maria Brandauer. Dorothy Dandridge was a singer, nightclub entertainer, and actress who became the first African-American woman to receive an Academy award nomination as Best Actress (for her standout performance in 1954’s Carmen Jones; she lost to Grace Kelly). However, despite her striking beauty and obvious talent, Dandridge was a sexy, glamorous black femme fatale at a time when Hollywood pin-up queens were supposed to be giggly blondes. The film industry didn’t know what to do with her, and while her nightclub act was a bit too smooth for the Southern roadhouse circuit, as a black performer she wasn’t allowed to stay in many of the hotels and resorts where she performed. Dandridge also had a sad personal life, filled with tragedy and romantic disappointment, and she died of an overdose of pills in 1965, at the age of 41.

Sean Combs, Phylicia Rashad, Audra McDonald, Sanaa Lathan, and John Stamos all return to reprise the roles they originally played on Broadway in this made for television take on Lorraine Hansbury’s timeless play about a 1950s-era Chicago family longing for a better life. Walter Lee has died, and now his widow Lena Younger (Rashad) is about to receive a $10,000 check from her late-husband’s insurance company. Everyone in the family dreams about the ways their lives will be changed with the arrival of the money, family matriarch Lena – who longs to retire from her job as a domestic servant for a wealthy white family – in particular. Much to everyone’s surprise, Lena uses the lion’s share of the money to purchase a home in the all-white residential neighborhood of Cllaybourne, splitting the remainder between Walter (for his entrepreneurial endeavor) and Beneatha (for tuition). Around the same time Walter loses his share of the inheritance to a smooth talking con man who claimed he could help finance the liquor store, the Claybourne “home improvement” association makes the discovery that the Youngers are black and sends emissary Mr. Lindner (John Stamos) to try prevent their neighborhood from becoming integrated by buying the house back. Now faced with the prospect of losing it all, Walter considers making a deal with Mr. Lindner in order to recover his losses.

Written by Ruth Gordon and Garson Kanin, Adam’s Rib is a peerless comedy predicated on the double standard. Spencer Tracy and Katharine Hepburn play Adam and Amanda Bonner, a husband-and-wife attorney team, both drawn to a case of attempted murder. The defendant (Judy Holliday) had tearfully attempted to shoot her husband (Tom Ewell) and his mistress (Jean Hagen). Adam argues that the case is open and shut, but Amanda points out that, if the defendant were a man, he’d be set free on the basis of “the unwritten law.” Thus it is that Adam works on behalf of the prosecution, while Amanda defends the accused woman. The trial turns into a media circus, while the Bonners’ home life suffers.