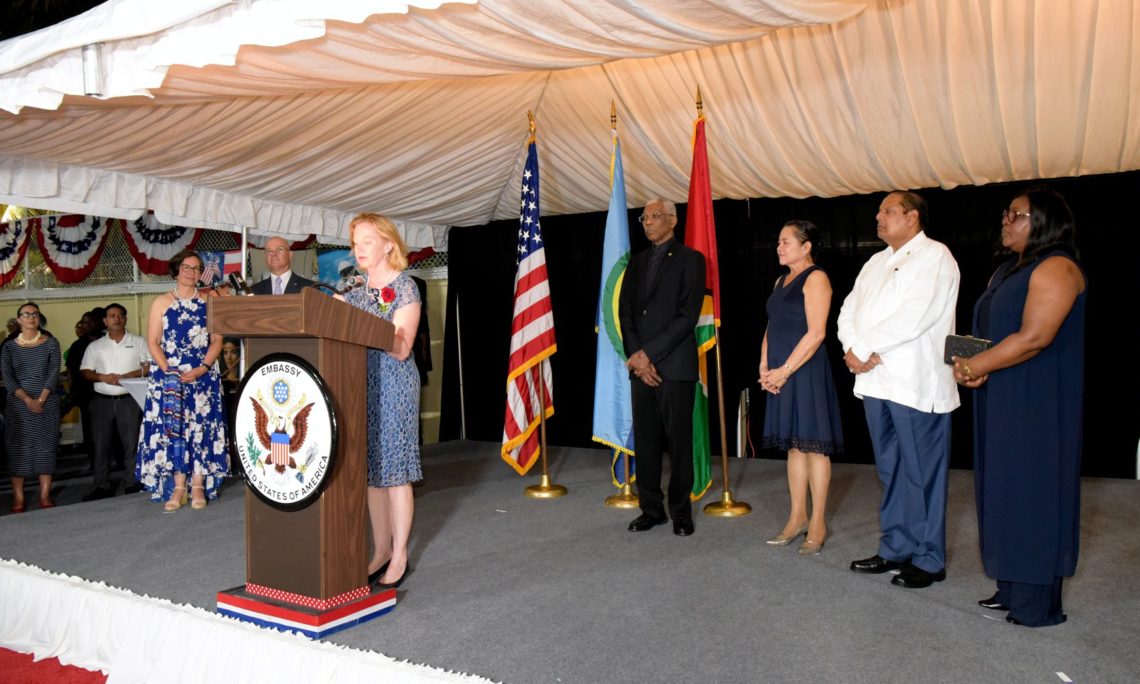 Kevin, Dylan and I would like to extend a very warm welcome to everyone here this evening as we celebrate the 243rd anniversary of the independence of the United States of America.

First, a few thank yous.  I’d like to thank all of the wonderful sponsors of tonight’s event – and, there are many of you.  Without your very generous contributions, we would not be having this lovely party.  I actually timed myself saying all of your company names, and I’m afraid I might lose the audience before I get to the end of the list, so I will call everyone’s attention to the large placards that are strategically placed around the compound with each and every donor’s name.  Thank you all again so very much for your kindness and generosity, and I look forward to speaking with you tonight, and at future events here at the Residence.

I’d also like to thank the US Embassy’s extremely hard-working staff – especially the Management, Facilities, Warehouse, Protocol and Residential staff – for their many months of hard work on this event.

I would also like to officially welcome two new members to the Embassy’s senior team – Theo Plummer, our new Regional Security Officer, and his wife, Joy, and, our new Deputy Chief of Mission (DCM), Mark Cullinane, and his wife, Marcia Bosshardt.

Mark has been with the Department of State for over twenty years, serving in places such as Peru, Argentina, Costa Rica and Nicaragua, as well as Afghanistan and Nigeria.  Most recently, Mark served as the Acting Office Director for Canadian Affairs in Washington, DC.  While you might think that I selected Mark for the DCM position because of his years of experience or his vast knowledge of economics or his stellar reputation in State Department, it was actually something far more important.  When asked which sports teams he supported, he very quickly responded: The Boston Celtics, the Boston Red Sox, the New England Patriots, and our family favorite, the Boston Bruins ice hockey team.  So, Mark, we are thrilled to have you and Marcia on board here.  I think you are going to love Guyana, and you will learn to add cricket to your favorite sports.

So – everyone – we are celebrating America’s 243rd birthday tonight – and, a lot has happened along that 243-year journey:

On this great journey, The United States has had some formidable successes.  In fact, we are marking one of those extraordinary achievements this month.  And, some of us here tonight are old enough to remember where we were when it happened, too.  I hate to admit it, but I’m one of those people!  Yes, I am talking about the Apollo Moon Landing.

On July 20th, 1969, astronauts Neil Armstrong and Buzz Aldrin became the first humans to set foot on the moon.  Do you remember those images?  But, they did not accomplish this remarkable feat on their own.  Their journey to the moon involved many others:  like Michael Collins, the astronaut who orbited the moon while Armstrong and Aldrin walked it, and who had a huge responsibility – he had to get back to the moon to pick the others up.  Like Gene Kranz, an American aerospace engineer who served as NASA’s Chief Flight Director, and directed the Apollo 11 lunar landing mission.  And the thousands of scientists, engineers, policy makers and others that made this unprecedented event succeed.

After landing on the moon, Astronaut Neil Armstrong is best remembered for uttering those famous words, “One small step for man; one giant leap for mankind.”  But, after his death in 2012, his children said that their dad was far more famous for saying to them that, “Success is where preparation meets opportunity.”

The United States has certainly had its share of successes, having been blessed with many things:  abundant natural resources, significant human resources, and the freedom to take its journey to new heights.  And, clearly, the United States set its sights high for success in the 1960s – to achieve the unthinkable, and as such, we had to – Prepare.

The lunar space crafts had to be flawless.  The launch date had to be exact.  And the landing site had to be perfect.  There was no room for error on this mission.  Even the messaging had to be perfect – the bald eagle and an olive branch were selected to represent the peaceful nature of the U.S. Mission.  All of NASA was focused on one thing – Success.  As such, preparation was critical.  For the Apollo astronauts that preparation was positively intense, with grueling physical training, punishing mental workouts, and willpower pushed to the limits.  Plus, the risks – there was no guarantee of a safe return.  So, I’m sure a strong dose of optimism helped as well.

Well, you all know how this story ended – successfully.  The United States faced unparalleled challenges in its journey to space, but it also succeeded in breaking extraordinary new ground.  Why?  Preparation had met Opportunity… And, that yielded Success.

Likewise, Guyana is on its own journey right now, also facing tremendous opportunity, having burst onto the world stage as it gets ready for the first extraction of oil.  I am proud that the United States continues to be a determined partner of yours as we continue to collaborate with Guyana in preparation for this new day:  partnering on the security front to make Guyana safer and more secure; partnering on the governance front to improve transparency and accountability, and to reduce corruption; partnering on the development front to enhance access to quality health care and increase educational and job opportunities; and partnering on the economic front to increase trade and U.S. investment in Guyana.  Our partnership will continue to thrive and be successful with strong U.S. and Guyanese leadership.

These are historic times in Guyana, and, as such, I encourage – in fact – I urge all Guyanese – government officials, leaders and members of the opposition, civil society and youth – to help your country on its journey to success; to help Guyana prepare to the greatest extent for this new day.  Remember the words of Neil Armstrong – “Success is where preparation meets opportunity.”

So, where were you on July 20, 1969 when Apollo 11 landed on the Moon?  I was on Cape Cod, Massachusetts, at the beach with my family, huddled around a TV (a black and white TV at that!).  So, I thought it only appropriate to invite you all to a Cape Cod style 4th of July clambake of sorts – with a Guyanese twist – complete with New England Clam Chowder, Lobster Rolls, Corn on the Cob, Boston Cream Pie, Salt Water Taffy, AND the signature drink of Cape Cod, the thirst quenching Cape Codder, made with Cape Cod cranberry juice, vodka and a lime.

I hope you all enjoy this Cape Cod style 4th of July celebration in America’s house in Guyana.  During the evening:

So – enjoy your evening, everyone.  Take photos!  Feel free to tag them with #J4 – that is hashtag J (for July) 4 (for the fourth).  Have a wonderful evening everyone.  Happy 4th!