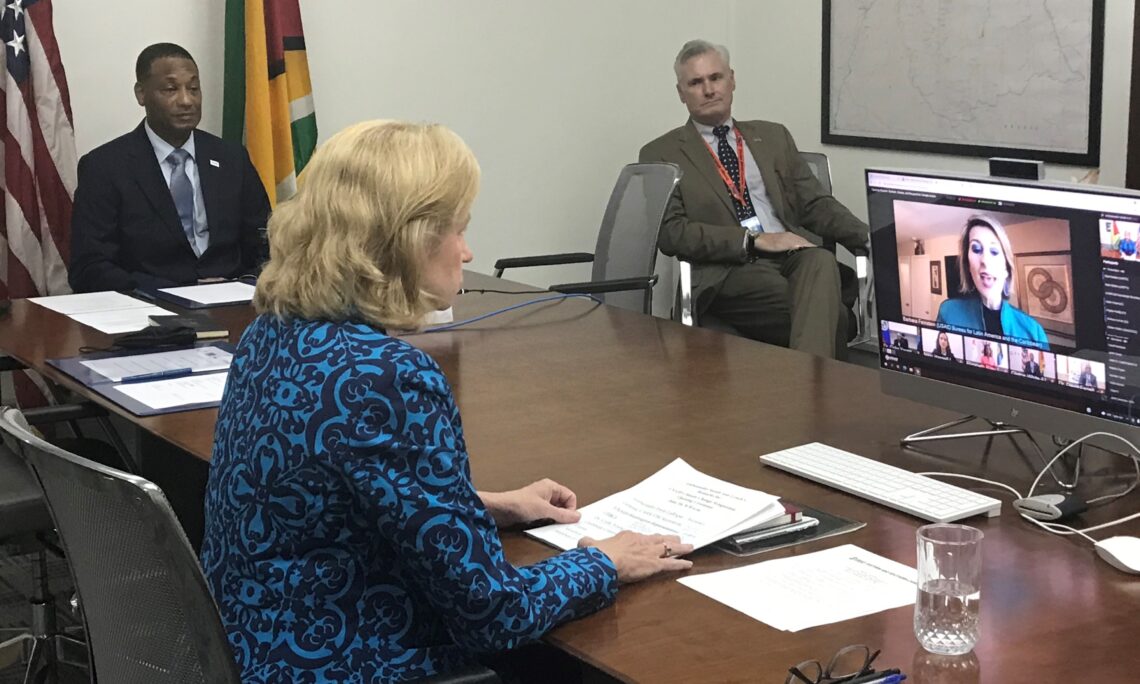 Thank you for the opportunity to speak with you this morning in this virtual environment. As we have experienced terrible flooding in Guyana over the past several weeks, the topic of climate change is never more relevant, as excessive flooding is one of its primary indicators. There are few issues for the United States as important as the impact of climate change. The Biden-Harris Administration has made it clear to the entire world that they are committed to climate action. We are renewing our ambition to combat the climate crisis and placing climate change at the center of U.S. foreign policy, diplomacy, and national security. We are also encouraging other countries to renew their efforts by engaging in climate diplomacy bilaterally and across a wide range of multilateral bodies.

Impactful action on climate change requires strong international cooperation, and  President Biden is showing his commitment to work with our global partners on this critical issue. In January, the United States re-joined the Paris Agreement and the President appointed John Kerry as his Special Presidential Envoy for Climate. In April, the United States hosted a Leader’s Summit on Climate, during which Vice President Jagdeo participated as a clear indication of Guyana’s commitment on the matter.  The United States also plans to send a delegation to Glasgow in November, to attend the UN Climate Change Conference, or COP26. The Biden Administration will ensure that we meet the demands of science, while empowering American workers and businesses to lead a clean energy revolution. And we invite Guyana and the rest of our friends and neighbors in the greater Caribbean Community to be a partner with us in this regard.

As part of the Biden Administration’s whole of government approach to addressing the climate challenge, USAID has been tasked with developing a new Agency Climate Strategy by November 1 to be released at COP26. This will incorporate all sectors of USAID’s work, where possible. USAID’s Eastern & Southern Caribbean (ESC) Mission was selected as one of five missions in the Latin America and Caribbean region to be part of the Advisory Group that will inform this strategy. The proceedings from this symposium and especially the needs expressed by participating countries and lead agencies will directly support our input into this process as well as the ESC Mission’s climate strategy. As a result, you can be assured that our efforts over the coming years will support your vision for a climate resilient Caribbean.

As Guyana works to develop its climate strategy, the United States stands ready to assist. Adaptation efforts such as reforestation of abandoned mining areas, improving enforcement through capacity building, and investment in law enforcement resources are a few of the many possible areas of cooperation. Mitigation measures may involve changes for the energy sector, which is one of the biggest sources of emissions. The planned 250-megawatt gas to shore power generation project will more than halve the cost of energy and wean the country from fuel oil over the next ten years. Smaller scale renewable energy solutions for Guyana’s remote interior regions would also be welcome, such as solar and hydropower. The 2021 annual GoG budget allocated $7.7 million to these renewable projects and the GoG plans to bolster that investment by accessing the outstanding $135 million from the REDD+ program, which are both positive steps.

We are pleased that through USAID, the U.S. Government has placed significant resources to strengthening the region’s approaches to adapting to and mitigating climate change, as well as other natural hazards. Our USAID ESC office is committed to supporting resilience to climate change in the region through strong relationships with governments as well as regional partner agencies. In fact, USAID has been working for quite some time to support resilience to climate change and natural hazards in the region and this will continue in earnest, in the years to come. We have seen the benefits of such work here in Guyana, and I will now briefly highlight some cases.

The $10 million USAID Climate Change Adaptation Project that ended in 2020 was developed to counter the impact of climate change. In 2019, I was part of a handover ceremony to the Government of Guyana for 21 automatic weather stations and equipment used for data gathering and analysis of climate related events.  The data produced help make predictions about future weather events, which will be important for planning across all sectors.

Another program involves local stakeholders. Under the Amazon Regional Environment Program, USAID/Peru is helping improve capacity for decision-making and management of the forests of Guyana through the SERVIR-Amazonia Program. This includes a collaboration between the University of Guyana and the International Center for Tropical Agriculture to promote training, research, and use of geospatial technologies in the areas of ecosystem management, water resources management and water related climatic disasters such as drought and fire risks.

Currently we are helping build the region’s resilience through two new initiatives. The first is the $4.5 million, three-year Caribbean Climate Resilience Initiative (CCRI), implemented by the Caribbean Disaster Emergency Management Agency, that began in August 2020. This program seeks to reduce the vulnerability of ESC countries and improve resilience to disaster risks. Activities will focus on strengthening operational readiness and recovery systems at the national and regional levels.

The second activity is a $5 million joint initiative with the Inter-American Foundation entitled, “Building Community Resilience in the Eastern and Southern Caribbean” running from August 2020 to August 2023. Under this initiative, USAID/ESC supports communities to become more resilient to the impact of natural hazards through capacity building grants to community-based organizations.

Ladies and gentlemen, we implement these programs in partnership with regional agencies working with governments and country systems to ensure ownership of programs implemented. Such work is developed through a framework agreement between USAID and the CARICOM Secretariat. This partnership with CARICOM has been renewed several times through an unbroken relationship over the past twenty years. We express our gratitude to the CARICOM Secretariat through Secretary General LaRoque, and we look forward to continued collaboration and the strengthening of our relationship.

The Memorandum of Understanding between USAID and key regional climate change partners that is being signed today provides a broad framework for cooperation between USAID, the Caribbean Community Climate Change Centre, Caribbean Institute for Meteorology and Hydrology, and the Caribbean Disaster Emergency Management Agency. It will strengthen the current institutional ties between them, as a basis for collaborating in the delivery of services to Member States of CARICOM located in the ESC, as this region seeks to protect its human and natural assets and build resilience to the impact of climate change. It’s these kinds of agreements that will bring us all closer to achieving our climate goals.

I encourage all of you watching this ceremony to tune in to the eight sessions to be presented under this Climate Change Symposium over the period of June 16 to June 30, 2021.

I know that together, as neighbors, partners and friends, we can make a difference.