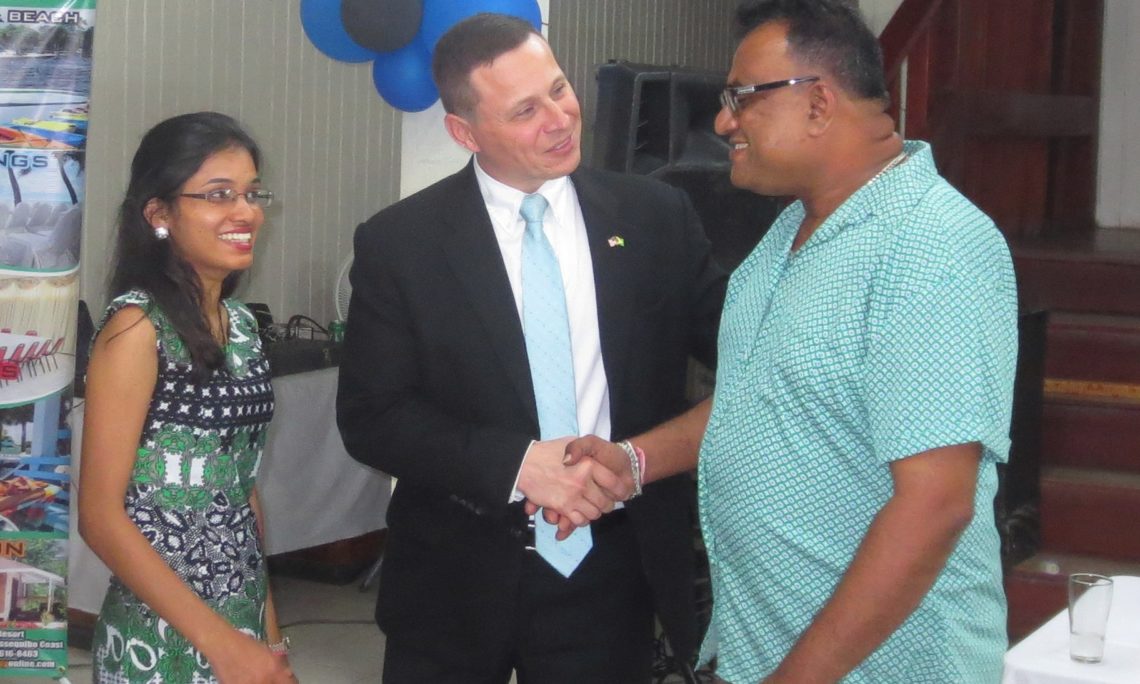 As the Chair said, I am Terry Steers-Gonzalez, Chargé d’Affaires at the U.S. Embassy in Georgetown.  Let me start by saying that I am glad to be in Essequibo.  As U.S. Secretary of State Mike Pompeo has expressed many times, the U.S. government is committed to maintaining strong connections between our two countries and advancing prosperity from the Corentyne to the Pakaraimas, from the Takutu to the Amakura, and across the entire ‘Land of Many Waters.’  With respect to the ongoing border “controversy” with Venezuela, the U.S. government has called on all parties to respect the 1899 arbitration decision.  I’m sure everyone in this audience, in particular, understands the full weight of both these statements by the U.S. government.

But, hopefully less controversial, I have been asked to speak tonight about Guyana’s economic future vis-à-vis the oil (and gas) discovery.  Our Embassy continues to repeat that it is truly difficult to comprehend the real magnitude of these oil finds.  This is really, really big.  Huge, gigantic, enormous, ginormous!

Exxon has drilled 12 oil wells thus far, and of those, 10 have been found to contain a combined 5 billion barrels of oil equivalent.  Starting in just over a year, the first oil well, Liza-1, will begin producing 150,000 barrels of oil per day. Guyana is on track to be the world’s largest oil producing country per person in the next decade.  At only a fraction of its full capacity, that is more than all of Trinidad and Tobago’s oil wells combined.  Note, this is only one oil well of 10 (and counting).  Guyana’s gross domestic product is expected to increase by 300% over the next five years.

Remember how big this is.  There will be an unimaginable amount of revenue (profits and royalties) coming into the country.  But, to be honest, we know from observing other economies that revenues can be fleeting, whether coming in or going out.  How can the Government of Guyana ensure that every cent of the monies will be used to the direct benefit of its people?  To answer that, I offer you three words: natural resource fund.  The establishment of a comprehensive sovereign wealth fund, which is what the proposed natural resource fund is, will be the cornerstone, or crown jewel, of any new oil and gas regime.  In case you are wondering why the Natural Resource Fund (or the oil and gas regime as a whole) should be of interest to you here in Essequibo, which is far west of the oil blocks that are down near the border with Suriname, let me explain how this is transformative for this entire country.  In the simplest terms, the Natural Resource Fund is a government-owned investment fund (not just a rainy day fund), set up to protect or boost the national economy and, in Guyana’s case, build, literally and figuratively, a future aligned toward green state development.  It will provide Guyana with the opportunity to invest in its long-term future as well as today’s infrastructure, health, education, security, and even agriculture.  Prudent management of incoming revenues will ensure that outgoing investments by the government in its people do not simply last for as long as oil is pumped out of the ground, but beyond that for the next 30, 50, 100 years, through the creation of diverse new industries and projects.

You may ask what role you can play in the process.  Now, more than ever, Guyana’s private sector is carving out its role in a new and exciting era in the country’s development trajectory.  As an engaged stakeholder, the private sector is actively lobbying for more expertise and information-sharing, and broadening the exchange of ideas.  This chamber, and others like it throughout the country, represent a diverse array of Guyana’s citizens and voters, but also, I have to imagine, its largest taxpayers.  You, therefore, have a unique opportunity (some might say a responsibility) to advocate for government action with the goal of seeing that the Natural Resource Fund benefits the Guyanese people well before oil profits begin rolling in.  Not just the government, but the people of Guyana, have an incredible opportunity to define your country’s future.  That future starts with a carefully calculated strategic plan of action – formed from the collaboration of all stakeholders – that targets job creation, investment, and long-term revenue management.

You must know that not all sovereign wealth funds are created equal.  So as you read and analyze the 2018 Natural Resource Fund bill, now before your Parliament, what should you be looking for?  A country would want to avoid, for example, a framework like Trinidad and Tobago’s because, according to recent reports, their sovereign wealth fund is essentially bankrupt.  On the other hand, it would be beneficial to learn from economies like that of the Canadian province of Newfoundland because of the similarities of its starting point with Guyana’s own.  Ultimately, despite the excellent examples available, it is not the specific type of fund that will mark success, rather, the marker will be that appropriate funds and mechanisms are in place to protect prosperity and pave a pathway to long-term growth.  To accomplish this, such a fund must be:  independent, transparent, inviolable, and non-partisan. How can you evaluate these criterion?

Independent– The Natural Resource Fund would ideally be overseen by an independent board, that is to say, comprised of individuals who are not beholden to any interested entity.  No process can be considered truly independent if it is controlled by persons who stand to benefit inordinately from a particular outcome (financially, politically, or in other ways).

Transparent- We all know how important transparency is in the fight against corruption.

But fiscal transparency refers to something more.  It means publication of high quality information on how a government (or an independent Natural Resource Fund) receives, spends, and manages a public resource.  “High quality” information means that info is released frequently, that the public has access to it, and that it is published in terms that the average person can make sense of it.  Greater transparency can strengthen the credibility of a country’s financial plans and entice increased foreign and domestic investment.

Inviolable– An important aspect of any law is the relative ease or difficulty with which it can be repealed and/or replaced.  Amending a law in order to improve it or to include pertinent considerations that were not available when it was first written is one thing.  Overturning it, potentially without a suitable alternative in place, is quite another.  The Natural Resource Fund is not just any law.  It will play a very important role in the economy and once a well-written framework is in place, it should be in place for the foreseeable future. Un-doing it should be quite difficult.

Non-partisan– Notice here that I did not say “bi-partisan” or even “tri-partisan.”  A natural resource fund ought not to be so tied to any part of the political machine that it can be used, instead of for its intended purpose, for partisan games.  Its terms should be politically neutral such that any government, be it now or 30 years from now, can maintain this sacred trust and fiduciary duty regardless of what political beliefs may be popular at the time.

So, does the 2018 Natural Resource Fund bill, in its current state, fit these four criterion? That’s not for me (or any foreign entity) to determine.  Even though Guyana and the United States enjoy a long relationship and strong economic ties, we are guests in your country. This is your oil, your oil profits, and your fortune and future at stake.  What I will say is that, as taxpayers, you should be very interested in ensuring a top-notch natural resource fund to which all (or very close to all) of the oil profits will be segregated for both long-term and short-term investments.  Dave Ramsey, a popular American financial expert is known for this catch phrase, “Stop wondering where your money went and start telling it where to go.”  That means that the parameters of any given pot of money, be it your household budget, your company’s business accounts, or a country’s natural resource fund must be specific, well-managed, and must account for every cent that comes in or goes out.  This is your Natural Resource Fund.

Certainly, Guyana is not alone on the road ahead.  Along with other international partners, the United States has and will continue to provide counsel and assistance in support of Guyana’s efforts to build industries – not just the petroleum industry – that are transparent, responsive, and accountable to all.  But, there is no amount of assistance that anyone can provide Guyana that can rival domestic political will, an informed private sector, and collaborative citizens.

In closing, I would like to extend my sincere congratulations to the Essequibo Chamber of Commerce and its President, Ms. Suean Seewnarayan, for a year of successful activities.  I look forward to seeing the new and exciting ventures and growth that will be powered by this Chamber and its members, and wish you all the very best for 2019 and beyond.  Thank you.