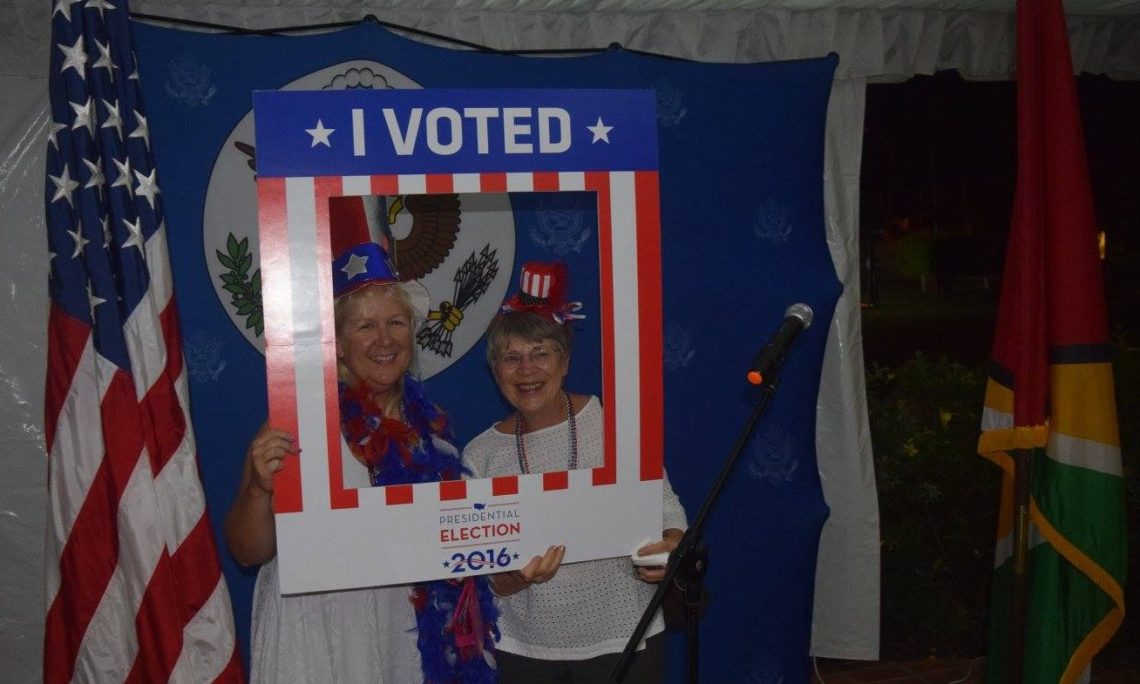 Members of the Diplomatic Corps

Members of the Private Sector, Civil Society and the Uniformed Services

Staff of the US Embassy

Thank you for joining us on this very special night when we celebrate democracy in action.  Throughout the day and into the evening, my fellow citizens in all 50 states, including my home state of South Carolina, are speaking with their ballots and selecting the 45th President of the United States, Members of Congress, and in some instances, local government officials.

Since 1789 when George Washington was elected the first President of the United States, we have had elections every four years – during our Civil War, and two world wars.  It is a time-honored tradition marked on the first Tuesday after the first Monday in November.

As President Obama recently said, “democracy is not a spectator sport.”  In a robust and vibrant democracy, it is the civic duty of all citizens to express their opinions and vote.  It is an essential component of the great American experiment in self-government, and it is why, as Abraham Lincoln said, “government of the people, by the people, for the people, shall not perish from the Earth.”
A key element of our democracy is the peaceful transition of power from one president to another.  For more than two centuries, after hard fought political battles with parties debating the role of government in domestic affairs and the role of the United States on the world stage, the voters speak, and the politicians listen to the will of the people.  The person who is elected president will be the leader of all Americans whether they are Democrats, Republicans, or Independents.

As you can see this evening, in the interest of bi-partisanship and fairness, we have television coverage from two of the major cable networks: CNN, which is widely viewed as a liberal news network watched by many Democrats, and FOX News, which often provides the conservative perspective and is watched by many Republicans.  Whichever network you happen to follow more closely, I recommend you look at the other network to get the alternative viewpoint.

One question I have been asked throughout the almost 18-month campaign is, “how will the outcome of the elections affect U.S. – Guyanese relations?”  My answer is that our bilateral relations were strong yesterday, are strong today, and will be strong tomorrow.  This year, we celebrate 50 years of diplomatic relations with Guyana, and we will continue working with the Government of Guyana and all stakeholders to make Guyana more prosperous, secure, and inclusive.

I know many of you are wondering who won our mock vote.  Before I announce the results, I would like to thank Dr. Steve Surujbally for officiating the poll and releasing the results in less than four days.  I would also like to thank Jason Calder of the Carter Center for being an outstanding observer.  Now on to the results.   There were 54 votes cast and the winner is Hillary Clinton.

If you haven’t already, I invite you to take pictures with Mrs. Clinton and Mr. Trump, and to visit our selfie stand.  Pictures will be posted on our U.S. Embassy Facebook page.  I strongly encourage you to LIKE us on USEmbassyGuyana and to share often. And please use our hashtags, they’re posted on the wall behind you.

Lastly, if you have any questions about the U.S. electoral college, our Political/Economic Chief James Bjorkman is here and has all the answers.

Again, thank you for coming and enjoy the rest of your evening.