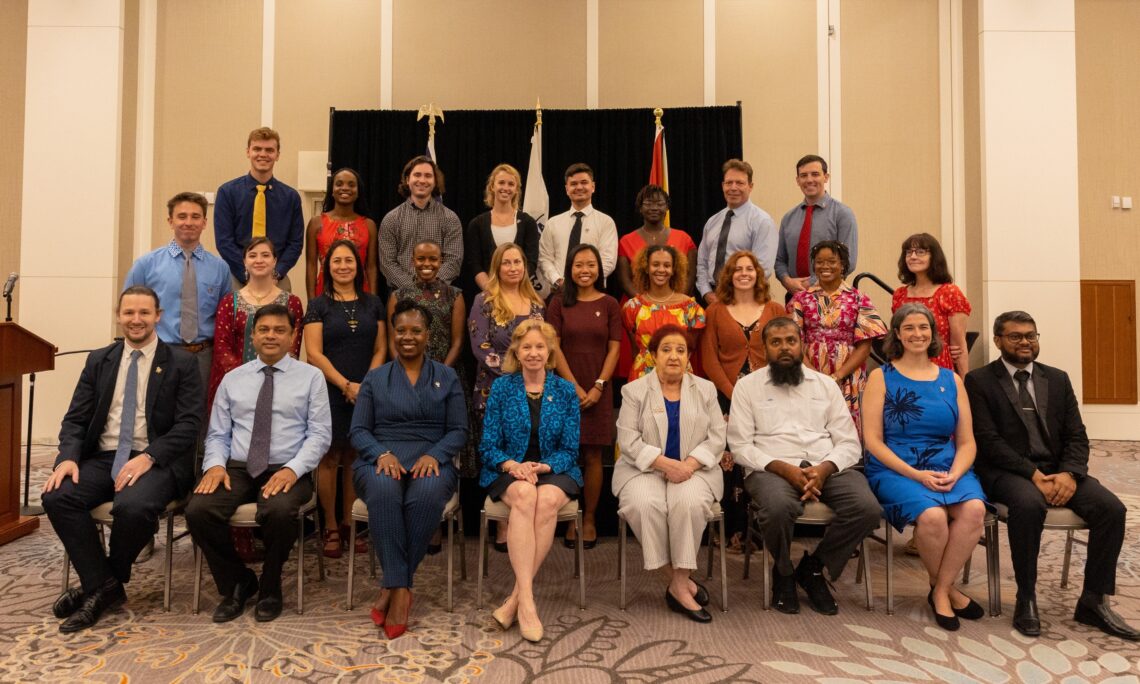 On Wednesday, December 8, 2022 at the Guyana Marriott Hotel, Georgetown, United States Peace Corps Guyana hosted the Swearing In ceremony for its 33rd group of Volunteers; the first to return after the global evacuation due to the COVID-19 pandemic. At the time of evacuation in March 2020, 54 Volunteers were serving in 9 of the 10 regions.
These 18 Volunteers who arrived in Guyana on September 29, 2022 underwent an intensive ten-week pre-service training. They will now live and work in local communities along the coast, partnering to address early childhood literacy, adolescent health, and environmental stewardship.
U.S. Ambassador to the Cooperative Republic of Guyana, Sarah-Ann Lynch, a returned Peace Corps Volunteer herself, administered the oath of service and Peace Corps pledge to the group on behalf of the Peace Corps. Ambassador Lynch remarked that the Peace Corps represents the very best of the United States and truly reflects the American values of strong sense of service, openness to other people and cultures, and a strong spirit of adventure.
Honorable Minister of Parliamentary Affairs & Governance, Gail Teixeira gave remarks on behalf of the Government of Guyana and expressed her profound appreciation for the agency’s continued support and partnership to the people of Guyana.
Country Director, Dr. Nadine Rogers lauded the agency’s support to the Ministry of Health’s vaccine hesitancy efforts in person, virtually, and via broadcast and social media. She also highlighted that Peace Corps Guyana joined a pilot virtual service model that allowed persons with needed expertise to support Guyana’s COVID-19 response; chronic disease efforts; and adolescent health program, while still in the U.S.
Since President John F. Kennedy established the Peace Corps by executive order on March 1, 1961, more than 240,000 Americans have served in 142 host countries.  Peace Corps first served the people and Government of Guyana from 1966 to 1971, then returned in 1995 with more than 1400 volunteers supporting Guyana’s communities through service, relationships, and partnerships for a sustainable future.
Upon accepting an invitation from the Peace Corps, Volunteers agree to serve for a two-year tour.  Peace Corps Volunteers reflect the diversity of America and return to the United States as more informed global citizens and with increased understanding of the people and countries in which they worked.  The Peace Corps extends its gratitude to the people and Government of Guyana for the hospitality and opportunities it offers these Volunteers to assist in the pursuit of the nation’s development aspirations.