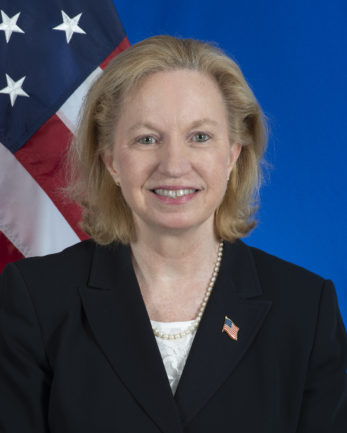 A career member of the Senior Foreign Service with the rank of Career Minister, Ambassador Lynch served with USAID from 1993 to 2018, and was posted overseas in Bangladesh, Peru, Afghanistan and Iraq where she was the USAID Mission Director in Baghdad.  In Washington, she served in the regional bureaus of the Middle East, Asia, Latin America and the Caribbean, as well as the Bureau of Democracy, Conflict and Humanitarian Assistance, and the Office of Afghanistan and Pakistan Affairs.  She has received numerous awards during her career, including USAID’s Distinguished Honor Award in 2010 and the Presidential Rank Award in 2018.

Before joining USAID, Ambassador Lynch worked in both international business and for a non-governmental organization.  She also served as a U.S. Peace Corps volunteer in Morocco where she taught English at the secondary level.

Ambassador Lynch is a graduate of Mount Holyoke College and holds Masters’ Degrees from The Fletcher School of Law and Diplomacy at Tufts University and the National War College.  Ambassador Lynch and her husband, Dr. Kevin Healy, have three children.