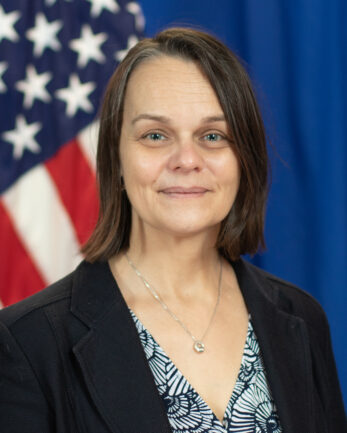 Ms. Galanek is a career U.S. diplomat.  She most recently served as a Department of State Faculty Advisor at the U.S. Naval War College.  Prior to the Naval War College, She was Deputy Director in the Political Military Affairs Bureau’s Office of State-Defense Integration. She also served as Deputy Chief of Mission in Belize and later as Chargé d’Affaires ad interim.  Other assignments include U.S. Southern Command (SOUTHCOM) as part of the Foreign Policy Advisor (POLAD) team. She worked closely with military and other U.S. government agencies to address security challenges across the Latin America and Caribbean regions.

Ms. Galanek’s career has taken her across several continents serving in a variety of capacities.  She served as the International Narcotics and Law Enforcement (INL) program director in South Sudan, economic section deputy and chief in Bosnia and Herzegovina, and Economic Officer in Windhoek, Namibia. She also worked in the Office of Southern African Affairs as the Desk Officer for Swaziland and Malawi. Other assignments include Oslo, Norway and Shanghai, China.

Ms. Galanek holds a Master’s Degree in National Security Studies from the College of Naval Command and Staff, U.S. Naval War College and bachelor’s degrees from Georgetown University in American Government and History.