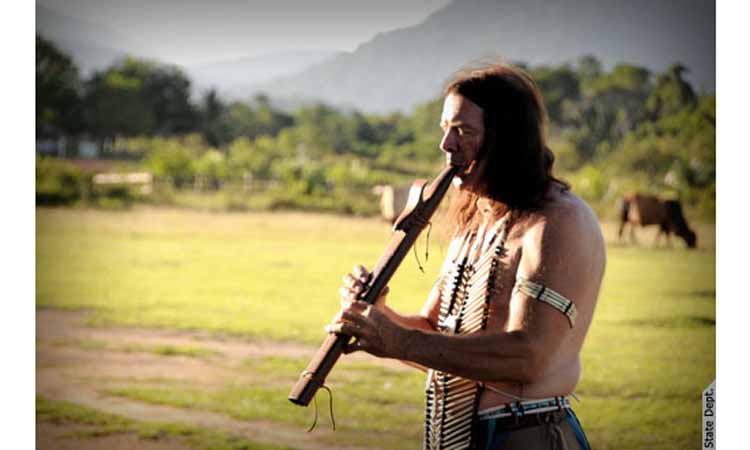 During his visit, Mr. Kent had the opportunity to meet with the Honorable Pauline Sukhai, Minister of Amerindian Affairs, as well as other civil society organizations to discuss projects, accomplishments, and the challenges the Native American and Amerindian communities face today.

Mr. Kent visited two Amerindian villages, The Macushi Nation in Surama and the Arawak Nation in St. Cuthbert’s Mission. During these visits he met with Toshaos and village leaders to discuss the importance of preserving culture and language and to look at some key challenges faced by their communities. In addition, a cultural exchange took place through art, music and dance. JJ Kent, an award winning flutist, shared his talents with the villagers and, in return, was entertained by the music and dance of the village residents. Community members participated in arts and craft projects, making ‘dreamcatchers’ and leather bracelets.

Mr. Kent performed at the Umana Yana, where United States Ambassador D. Brent Hardt, Honorable Minister Sukhai, and others from the diplomatic community, together with artists and Amerindians, enjoyed a presentation on the Lakota Native American culture and took in the beautiful sounds of JJ Kent’s flute. Mr. Kent also visited the Walter Roth Museum, where he gave an impromptu concert to school children and recorded the Lakota language for the museum’s language database. Mr. Kent’s visit generated a range of people-to-people exchanges that offered opportunities to explore cultural similarities and differences between Native Americans and the Amerindians of Guyana, enhance mutual understanding, and highlight the common bonds between the United States and Guyana.