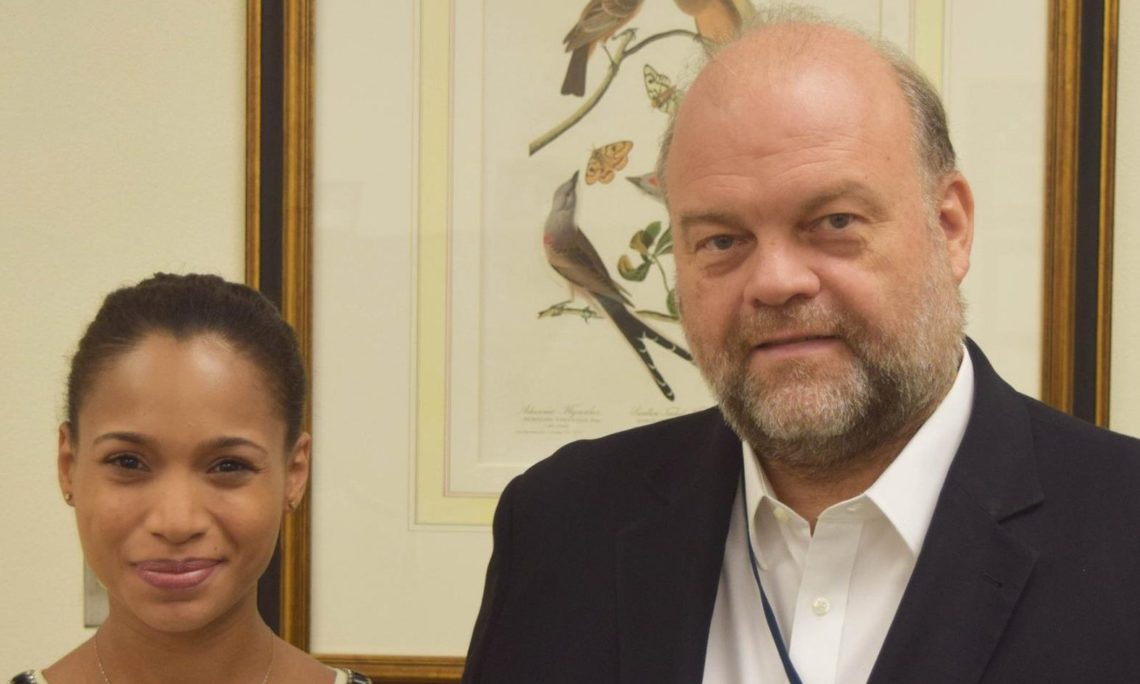 Georgetown – Ambassador Perry Holloway met with Christine Gooding upon her  return from the United States after participating in the Embassy-sponsored International Visitor Leadership Program (IVLP) exchange.  Ms. Gooding, founder and co-owner of Market Square (M2) joined twenty-three other female entrepreneurs from various industries across the globe in an IVLP exchange on “Women and Entrepreneurship” from February 27 – March 19, 2016.

Recognizing that the untapped potential of women is a lost opportunity for economic growth and development, the project aimed to illustrate the essential role of non-governmental and grassroots organizations in supporting and empowering the development of women-owned businesses; and exploring the progress of women in participating more fully in the global economy.  Through in-depth discussions, workshops, and site visits, participants were introduced to various business models, support mechanisms and innovations such as micro-lending, multi-level marketing and the use of the internet.  Discussions also centered around societal barriers facing entrepreneurs, especially women and other disadvantaged groups.  Participants with firsthand experience overcoming those barriers had the opportunity to share best practices with their counterparts.

Among the highlights of Ms. Gooding’s program was a visit to Silicon Valley, the heart of entrepreneurship, the Information and Communications Technology (ICT) sector and innovation.  She was particularly impressed with the emphasis placed on technological advancement for women and girls.

Promoting the full participation of women and girls in the political, economic, and social realms of their countries remains a key goal of U.S. foreign policy.  Ambassador Holloway reaffirmed the U.S. Government’s commitment to work with and strengthen the role of organizations and contribute to the improved well-being of Guyana’s most valuable resources – its people, through capacity building and strengthening institutions.  He noted that the IVLP program offers one of the best means to do so, as it fosters an exchange of new ideas with leading Americans and U.S. organizations, while leading to lasting connections among IVLP participants.

The International Visitor Leadership Program (IVLP) brings together emerging leaders in their respective professions to learn how U.S. experts in their professions operate, and to share best practices with other program fellows who hail from across the globe.