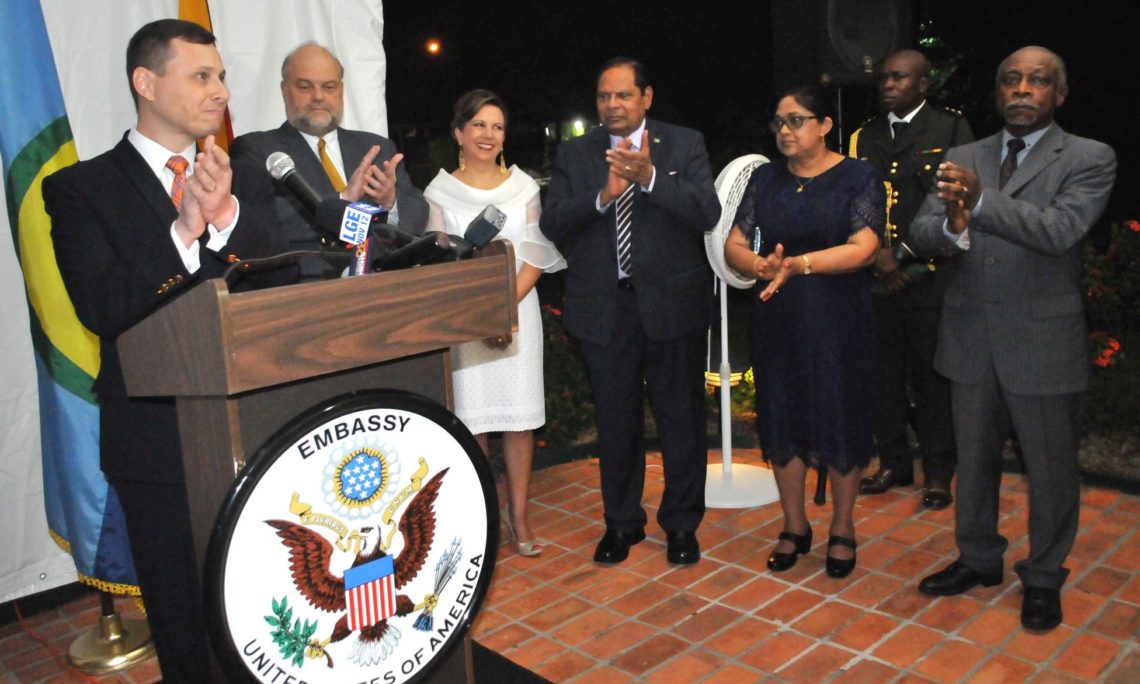 Representatives of the Government of Guyana joined the U.S. Embassy to bid farewell to Ambassador Holloway and family

“A very strong opinion is not a fact, no matter how strong the opinion.”  That’s #9 from Perry’s Partially Plagiarized Pearls of Wisdom.  There are 15 of them, actually.  I’m sure the Ambassador would gladly send you the full list if you ask him.  Since they’re plagiarized anyway, you shouldn’t have to worry about any copyright violation if you do decide to share the list with others.

I have learned that list by now… well, most of the list.  More importantly, all of us at the U.S. Embassy have learned so much more from this man, Perry Holloway – a husband and father; a friend, colleague, and mentor; an accomplished diplomat – our Ambassador.

Only because I promised to keep these remarks brief will I mention the mere highlights of his (and his mission’s) accomplishments.

Ambassador Holloway and his gracious wife and partner, Mrs. Rosaura Holloway, over their three plus years here welcomed 73 Peace Corps Volunteers to Guyana, who have served (or continue to serve) 60 communities in all 10 regions of this country.  He oversaw Peace Corp’s establishment of its first Environment Program in Guyana, and Ambassador and Mrs. Holloway visited Volunteers as far afield as Regions 8 and 9.

One could say on the other side of the spectrum, Ambassador Holloway also opened at this Embassy, in February 2016, the first Drug Enforcement Administration Office (DEA), which to date, has provided crucial support to Guyana’s own CANU and Police, and oversaw the investigation involving a major Guyanese narcotics trafficker to be charged in the United States.

The Ambassador’s International Narcotics and Law Enforcement Unit has leveraged approximately US$2.5 million in training and equipment to the Police, CANU, FIU, GRA, DPP, Presidential Guard Service, and the Judiciary, among others.  That training piece involved 1,128 law enforcement and judicial sector officials, and counting.  His Security Cooperation Office supported the training of 120 defense and security professionals, a total commitment of about US$1.5 million.

USAID’s youth and community programs over these three years have seen 417 Guyanese youth complete life and work-related skills training, with 309 youth linked to employment opportunities and 149 youth starting micro-businesses.  And, PEPFAR, USAID, the Defense Department, and Centers for Disease Control have supported Guyana’s national response to the global HIV epidemic and Treat All initiative, which has undoubtedly saved countless Guyanese lives in just the last three years of a nearly 15-year program.

The Ambassador’s Political and Economic Affairs Section encouraged the recent launch of Guyana’s first American Chamber of Commerce (AmCham) and his Regional Security Office founded the Guyana Overseas Security Advisory Council, providing a network for businesses to share security-related information and best practices throughout Guyana and, indeed, the region.  These new organizations buttress Guyana’s private sector and a growing number of American companies as well.

But all these figures, while useful and important, don’t tell us the whole story.  To really fill things out, we’d need to talk about how much Ambassador Holloway values the relationships he’s built with you, everyone here in the room this evening, and with the Guyanese people. And, on top of that, how much we’ve been able to accomplish, working together.

There is one more item I do want to highlight, and Ambassador Holloway actually logged this win before he even arrived here in September 2015, while he waited in Washington for confirmation by the U.S. Senate.  Previously, we had simply “support[ed] the timely resolution of the Venezuela-Guyana border controversy.”

In large measure because of Ambassador Holloway, the U.S. Government now also “call[s] on all parties to respect the 1899 arbitration decision….”  While some might discount this seemingly simple addition, most of us present tonight understand how truly big it was, and is.  Well done Sir!

I would be remiss if I didn’t also mention how Mrs. Holloway (Rosaura) has done so much for her American Embassy, for the Guyanese people, and the relationship between our two countries.  From the walk-a-thons in the fight against breast cancer to her fundraising and ongoing support for the women’s shelter, and through food donations to area orphanages, she has left her mark, changing lives for the better and helping the most vulnerable in our community… and Georgetown (and Guyana) is our community.   I know for the U.S. Embassy and international circles here in Georgetown, her departure will be a heartfelt loss.  Thank you for your service and dedication to all of us, and for your kindness and friendship.

Lastly, on behalf of all of my colleagues at the U.S. Embassy, I cannot tell you how proud we are to have served with the Holloways and to have accomplished so very much over the Ambassador’s time here in Guyana.  On an even more personal note, it has been a privilege and pleasure of a lifetime to have worked with you again, my colleague and friend these many years.  We wish you and your family God’s blessings as you conclude this 30-year career, journey, adventure, odyssey. And, while I don’t have a glass with me here at the podium, for those of you out there who do, please raise your glass to the Holloways… Bon voyage, and may our paths cross again, very soon.