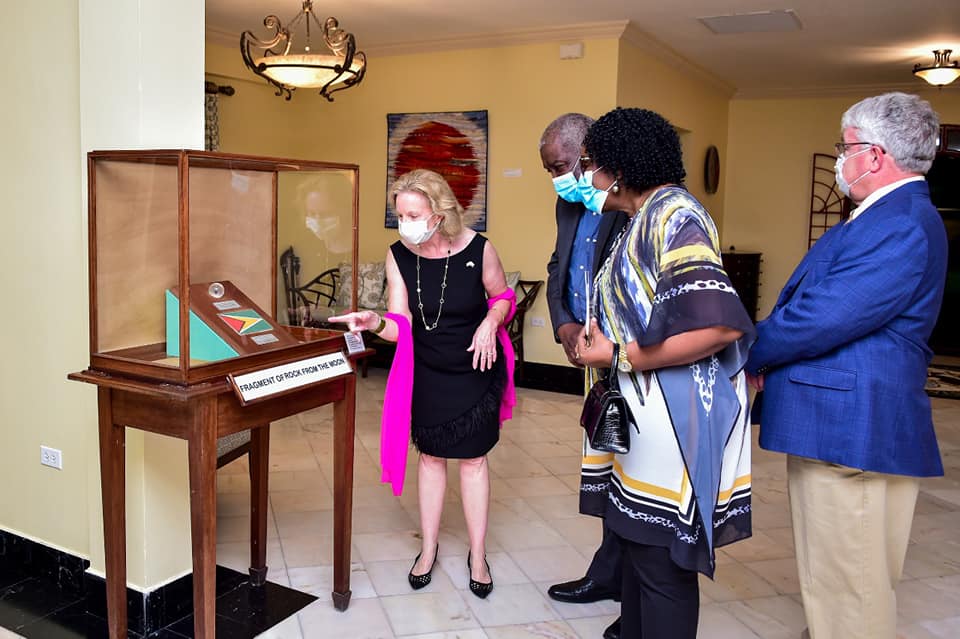 To highlight the shared values of cultural expression and artistic freedom between the U.S. and Guyana, Ambassador Lynch hosted Honorable Brigadier (Ret’d) Mark A. Phillips, Prime Minister, performing the duties of President of the Co-operative Republic of Guyana, at a reception on September 24 to celebrate an exhibition of American and Guyanese art and cultural performances. The American art is curated as part of a U.S. Department of State program called Art in Embassies.  The program creates temporary and permanent exhibitions of American art at most of its 200 diplomatic facilities throughout the world.

The Museum of Modern Art in New York City first envisioned this global visual arts program in the 1950’s. These exhibitions provide international audiences with a sense of the quality, scope, and diversity of U.S. art and culture, establishing a presence in more countries than any other U.S. foundation or arts organization.  Ambassador Lynch also featured Guyanese artists at the event.

During her remarks, Ambassador Lynch thanked the Guyanese performers and artists who participated in the celebration, including Winslow Craig, Merlene Ellis, Aiesha Scotland, Gavin Mendonca, Elsie Harry, Nia Allen, and Yashmini Sarjoo. “Like the United States, Guyana is a mosaic of cultural traditions. Both of our countries have experienced the creative beauty and distinct flavors from different cultures which have contributed to our rich heritage. Embracing and celebrating distinct cultural traditions is a shared value that reinforces our strong bilateral partnership,” said the Ambassador.