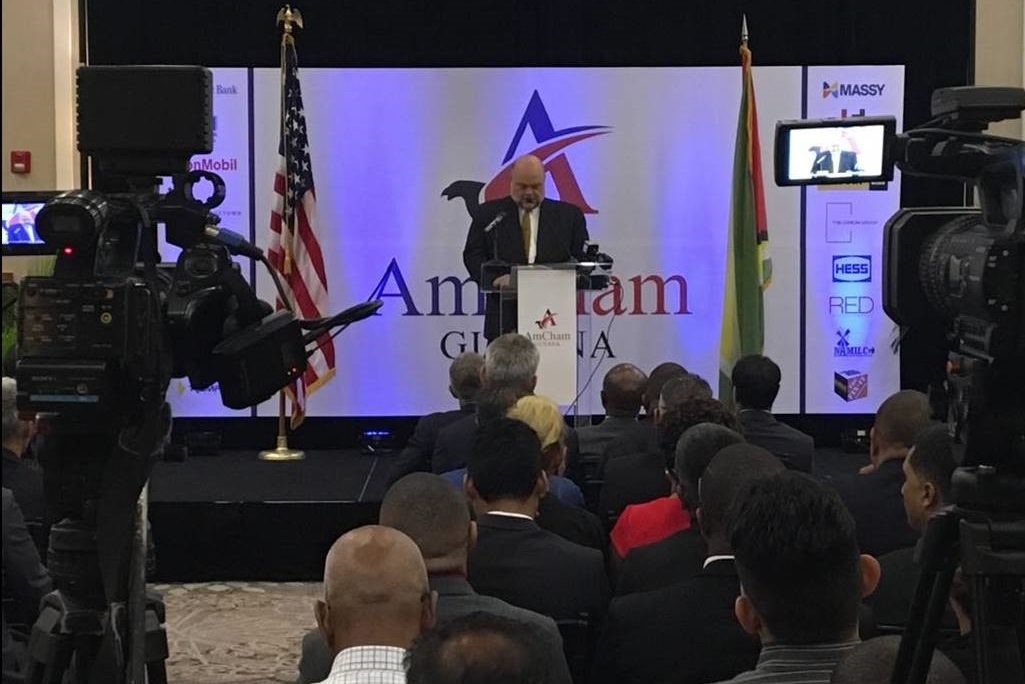 One of my goals when I first arrived in Guyana was to support the launch of an American Chamber of Commerce in Guyana.  However, I honestly was not sure whether there would be enough interest.  I want to commend AmCham-Guyana’s leadership and other supporters within Guyana’s private sector, who took this initiative from concept to reality in record time.  In fact, I would not be surprised if Guyana has not set the record for the fastest launch of an official AmCham affiliate since this was a mere concept just earlier this year.

For Guyana, this is a perfect time to launch an AmCham affiliate. AmCham-Guyana will promote and create US-Guyana trade and business opportunities and partnerships.  It will also share in the exchange of best practices for institutions and systems building.  Both American and Guyanese companies will benefit, as will the people of Guyana and the United States.

Of course, I am not sure whether anyone could make remarks here tonight without mentioning oil.  Most have heard my comments many times on the subject, and I will not say much.  However, I will say that this discovery is really, really big and it will have really, really, big impacts on Guyana’s future and its people.  In fact, without the discovery of oil in 2015 and the subsequent influx of American companies into Guyana we would likely not be here tonight.

Guyana is much more than oil, as is evidenced by an economy that has seem positive growth for at least the last 10 years.  Beyond oil, Guyana can also leverage and develop its other industries to include tourism, manufacturing, non-oil extractive industries, and other services. It is apparent that Guyana is seizing the moment.  The government has launched several initiatives to encourage more foreign direct investment and the environment is friendly to foreign investors.

Foreign investment will only increase in the coming years. Guyana has vast untapped resources and a small population.  The potential is enormous.  With the right policies, Guyana could become one of the richest countries in the hemisphere in terms of per capita Gross Domestic Product of GDP.  I have said it before, the real job creation in Guyana will not be from oil, but rather in the sectors that the government of Guyana decides to invest in using the oil revenues.  The government and people of Guyana will make those decisions, but investing lots of the oil revenue in education, health, security, infrastructure, and agriculture all seem like good ideas; as is the creation of a sovereign wealth fund.

Guyana’s private sector is carving out its role in a new and exciting era in the country’s development trajectory.  As an engaged stakeholder, it is actively lobbying for more expertise and information-sharing and broadening the exchange of ideas and partnerships with global organizations.  In a testament to its leadership and its desire to move forward with relevance and speed, AmCham-Guyana has set three initial priorities for itself and its members.  These three priority areas are the Sovereign Wealth Fund (Natural Resource Fund), the Petroleum Commission bill and local content legislation.  These choices are highly relevant and AmCham-Guyana’s focus on these is an early indication of the commitment to be an active stakeholder committed to see growth and development in Guyana.

While I have the floor, I want to highlight another collaborative effort from this year between the private sector in Guyana and the US Embassy.  In June, Guyana’s private sector became part of the Overseas Security Advisory Council (or OSAC) by setting up its own Country Council.  These councils focus on a range of issues, including business and information security and intellectual property rights.  What these initiatives indicate is that Guyanese businesses and entrepreneurs are active in positioning their country to engage successfully in the global business environment.  The private sector is not only reaching out and building linkages and cooperation with businesses and organizations across the world, it is also looking at how to become more competitive and develop strong and innovative local content for emerging markets.  For this, I commend you.

As I mentioned at the beginning of these remarks, AmCham-Guyana was an idea, and, in the classic tradition of “great minds thinking alike,” this idea has reached fruition well before expectation. I see the launch of the OSAC Country Council and now AmCham-Guyana as more elements in the strong relationship between the private sector and the U.S. Embassy.  We have worked hard to engage the United States’ and Guyana’s businesses and continue to support them in every way we can.  Through the launch of AmCham-Guyana, we anticipate forging and facilitating even more commercial links between US and Guyanese businesses.  We also look forward to participating in AmCham-Guyana’s events and activities, and getting to know AmCham-Guyana members directly and personally.

In closing, I would like to extend my sincere congratulations to the AmCham Board and members and good wishes for AmCham-Guyana’s success.  I look forward to seeing the new and exciting ventures and growth that will be powered by AmCham- Guyana and the country’s private sector.  Thank you.