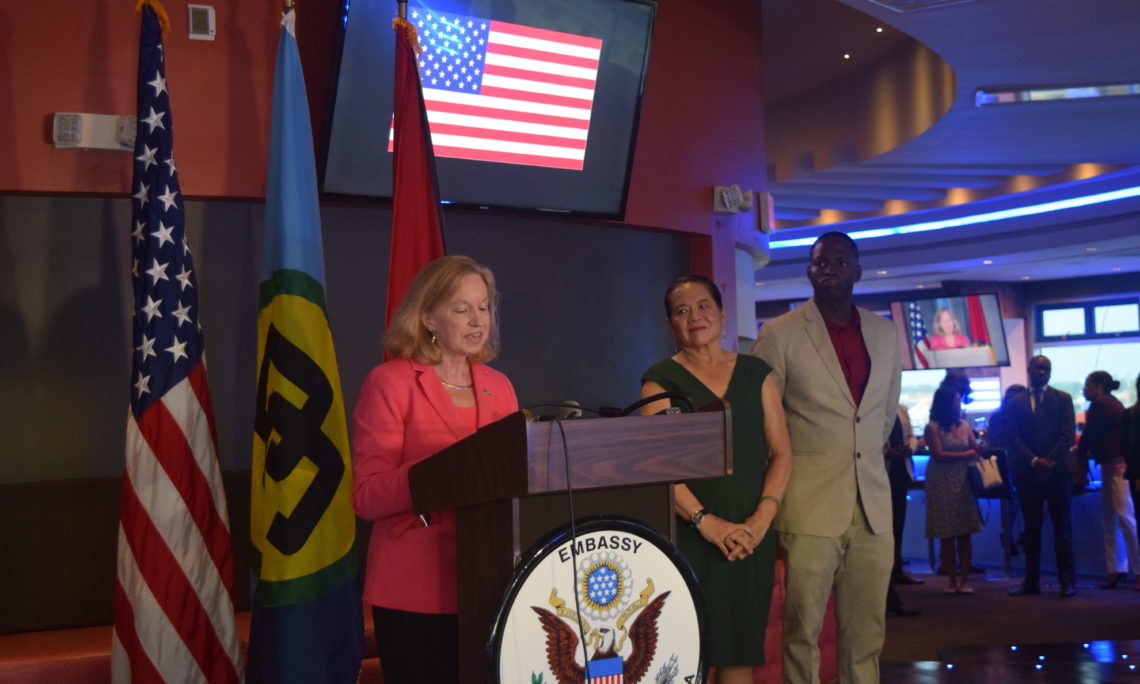 Remarks by Ambassador Sarah-Ann Lynch
Reception in Commemoration of the International Day Against Homophobia, Transphobia and Biphobia (IDAHOTB)

Good Evening, and I’m happy to be here with you all to commemorate the International Day Against Homophobia, Transphobia and Biphobia. I am heartened to see such a strong showing by representatives of the Government of Guyana, the private sector, and civil society this evening.

Let me start by saying that we as the United States government understand that many people and even institutions consider Lesbian, Gay, Bisexual, and Transgender (LGBT) rights to be a sensitive issue. However, we also know that in Guyana and many other parts of the world, members of the LGBT community have sometimes faced violence, harassment, intimidation and disregard of their basic human rights.

More troubling is the fact that despite being signatories to the many United Nations human rights agreements, many governments still seem far from establishing real legal protections for members of the LGBT community.

In the Caribbean, many LGBT youth face social, economic, educational, and other disparities. Though Guyana has made a measure of progress in this regard, some issues persist. A mere decade ago in Guyana, gay men experienced harassment and other social consequences for cross-dressing; and, as you know, it is still illegal for adult men to be involved in consensual same-sex sexual activity.

Gay rights are human rights. I cannot emphasize this enough. If we as a society are committed to ensuring that all people are respected and treated equally, then it is imperative to remember that this includes the LGBT community as well. Justice and protection must be for all. LGBT individuals, as well as other marginalized people, are entitled to the full measure of dignity and rights, not because they belong to a distinct group, but because they are people.

In Guyana, organizations like the Society Against Sexual Orientation Discrimination are leading the effort to bring about judicial and legislative change to ensure justice and protection for all Guyanese. We are encouraged by the small triumphs for the gay community in Guyana recently. The Government of Guyana has signaled a softer tone towards the LGBT community, permitting the first gay pride parade in June 2018. We commend the government for its support. And last November, the Government said that it respects the Caribbean Court of Justice’s landmark decision that found that the Guyanese law against cross dressing was unconstitutional. These are slow but promising changes in attitude at the national level.

We know that the human rights obstacles that people in the LGBT community experience sometimes arise from deeply held personal, political, cultural, and religious beliefs. While those personally held beliefs must be respected, so must the basic rights of our brothers, sisters, parents, and children who are gay. Recently, U.S. Secretary of State Pompeo said that members of the LGBT community – “like all persons – must be free to enjoy their human rights and fundamental freedoms without reprisal.”

The U.S. Government is committed to protecting and defending the human rights of all, including LGBT persons. The U.S. Mission in Guyana has proudly supported efforts by the NGO community to promote LGBT rights, and we look forward to continuing to work with you all on this important issue.