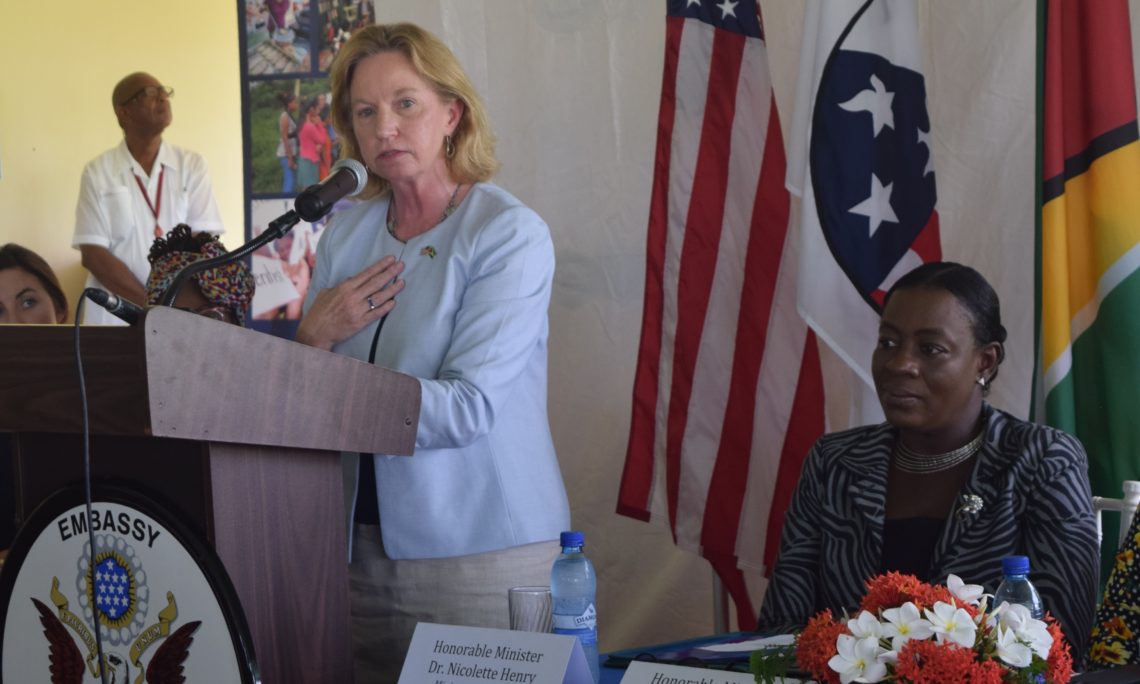 Ladies and Gentlemen, you know, in March, just after my arrival to Guyana, Kury was one of the first people I met, and after we exchanged the usual greetings and spoke about the US Embassy’s work in Guyana, she asked me if I would host Peace Corps Guyana’s 32nd Swearing-In Ceremony.  I tried to look very composed, nonchalant and well, calm, but I couldn’t help myself – I responded with a resounding YES immediately!  When is this ceremony, I asked?  Not until August??  I think my exuberance may have taken Kury a bit by surprise, but – truly – as a former Peace Corps Volunteer myself, I knew that hosting THIS event would be one of my greatest honors during my tenure as US Ambassador to Guyana.  And, Kury – it truly is an incredible honor and privilege to be standing here before these 29 men and women who have chosen to serve in “the toughest job they’ll ever love.”  [For those who don’t know, that’s the informal Peace Corps motto.]

And, it is a tough job.  Over the past 57 years, more than 230,000 volunteers have served in 141 countries, often in very difficult assignments and sometimes even dangerous conditions.  Before heading out to their posts, volunteers acquire a new (or improved) technical skill; they often learn a new language or dialect; and they learn to understand a new culture.  Luckily, Peace Corps training is among the finest the United States has to offer.  And, I am not just saying this because I’m surrounded by Peace Corps staff up here.  The Peace Corps has devoted itself to developing state-of-the-art training, and truly knows how to set the Volunteers up for success.  And, I’m sure that this group here will be highly successful in achieving the three goals of the Peace Corps:  (1) to provide necessary assistance to the interested nation; (2) to promote a better understanding of Americans to other people; and, (3) to promote a better understanding of other peoples to Americans.

Peace Corps Guyana has contributed to the Peace Corps vision of world peace and friendship since 1966 with (to date) close to 1,400 Volunteers who have served, lived, and worked alongside the Guyanese people, sharing their aspirations, helping them address their challenges, and celebrating their achievements.  The Peace Corps’ special ingredient in Guyana and globally is a people-to-people approach to learning, reinforcing, and building capacity at the community level.  And, 53 years later, Volunteers are still serving the people of Guyana, having lived and worked in all 10 regions of this beautiful country.

Each year, Peace Corps Headquarters, based in Washington, D.C. recognizes a few posts around the world for “sustained superior performance that has furthered the cause of world peace and friendship by making a positive impact on Volunteer support and/or post operations.”  Peace Corps/Guyana was recognized at the end of last year for its extraordinary and exemplary efforts through the receipt of the Peace Corps Director’s 2018 Distinguished Service Award.  From my time in country, I have had the pleasure of interacting with the Peace Corps program and its Volunteers and fully concur with the well-deserved recognition that this post received.  Congratulations Peace Corps/Guyana.  I look forward to continuing to support Peace Corps leadership and Volunteers during my tenure as U.S. Ambassador so that, together, we can continue to make a positive impact here in Guyana.

TO THE VOLUNTEERS
Trainees (almost Volunteers), today we celebrate YOU, the 32nd group of Peace Corps Trainees to swear in as Volunteers in the Cooperative Republic of Guyana.

I congratulate you all on passing your past 10 weeks of training on the Essequibo, which included intense sessions on technical theory, Creolese language, Guyanese culture, and practical training on model school programs, all while living with a local host family.

Your diverse class of 29 Trainees (ages 21-50) hails from small rural towns in America (like Silverton, CO – population 400) to the megacities of New York, Chicago and Boston.  We have a park ranger, a camp counselor, a veterinary assistant and a special education teacher – to name a few professions represented – in the group.  Your diversity brings in fresh ideas, strengthens tolerance within the group and in your new communities, and empowers each of you to share more of yourselves, explore more, and fully embrace the Guyanese culture.  Ten (10) of you will go off to work in Education, 10 in Environment, and 9 in Health.  You are being posted to eight of Guyana’s 10 regions, and 40% of you will be serving in some of the neediest indigenous communities.  And, your long-awaited arrival almost doubles the number of serving Volunteers in country.

But, let me remind you that you are committing to two years of service – service to your country, the United States, and service to the Guyanese citizens in your communities and beyond.  As with those before you, we expect excellence; we expect professionalism; and we expect commitment during your two years of Peace Corps Service.  We are all proud of you, and you should be proud of yourselves in this moment.

The oath you are about to take is a time-honored tradition.  It underscores and reinforces the commitment you have made to serve within the United States Peace Corps.  This is the same oath that is taken by the military, foreign service officers, and the President of the United States.  And, in fact, it is the same oath I took in 1984 when I was sworn in as a Peace Corps Volunteer in Morocco.