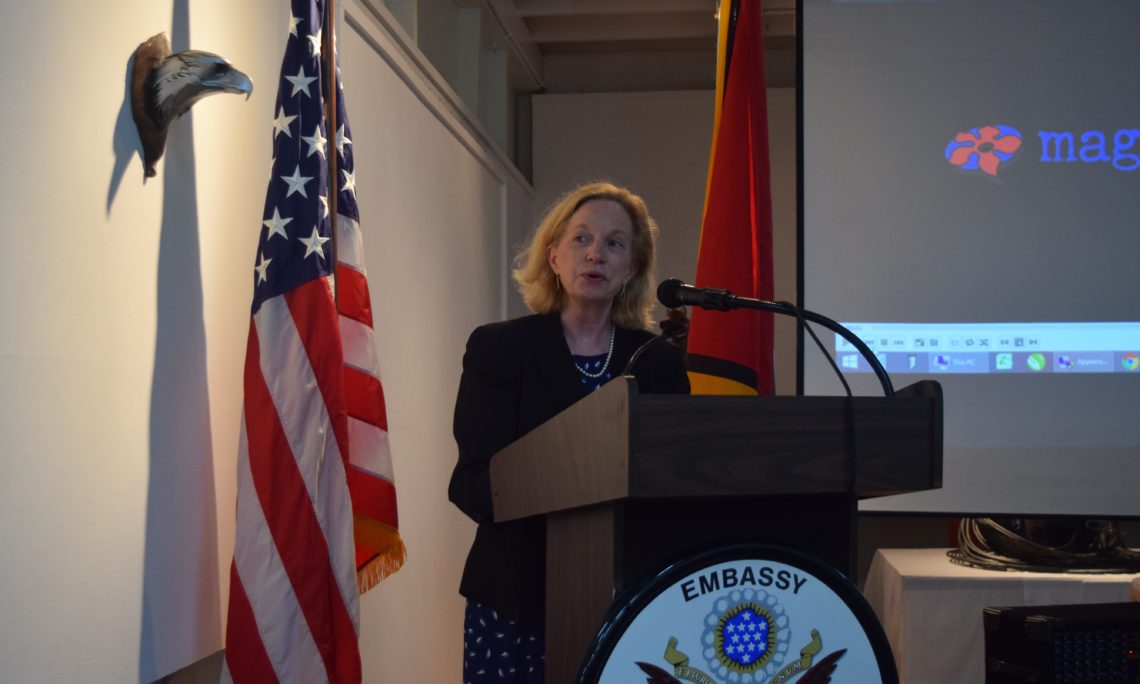 Good evening. Thank you for including me tonight. I’m pleased to be here.

As the Embassy observes Women’s History Month, we pay tribute to generations of women who have made extraordinary contributions to their nations and the world.  Women like Ruth Bader Ginsburg, who made her way from Columbia Law School to the U.S. Supreme Court, becoming renowned along the way for her staunch advocacy for the fair treatment of women.  Without giving away too much about the film, we will learn tonight how Justice Ginsburg’s early legal battles have changed the world.

A week ago last Friday marked the 110th observance of International Women’s Day.  Things first got started 111 years ago, in fact, at the 1908 “women’s strike” in New York, where women went on strike to protest unreasonable working conditions.  A year later, at a meeting in Copenhagen, it became an internationally designated day, when over 100 women, from 17 countries, met to honor the women’s movement and build support for achieving universal suffrage for women.

Women’s suffrage. Yes, this was 1909, and women were not then allowed to vote.  I’d like to pause for a moment here, especially for the younger women in the audience, while we give this historical fact its due consideration.  There was a time in both of our countries when women could not vote.  Our opinions and decisions were discounted and mainly ignored.  Isn’t it hard to imagine any country getting away with that today?

In my work, from time to time, I’ll run across someone who questions why we need to have a day, let alone a month, to celebrate women.  But the thing is, what we’re doing throughout March is reflecting on the many achievements women have made around the world towards gaining equal status with men.  Getting to vote in elections is one of many.  How about being able to own property in our own name, without a father or husband having to be involved.  What about the simple right of being able to keep the wages we earn.

We enjoy each one of these rights, and countless others thanks to the tireless work of many women, and men, who came before us.

What you young women in the audience will reach for, and teach the rest of us, and all of Guyana, I look forward to seeing.

A previous U.S. Secretary of State once said that no country can ever hope to advance if it leaves half of its population behind. Today, the United States is committed to advancing gender equality through U.S. foreign policy, because it is critical to security, prosperity, and peace.

Guyana is at a crossroads in history where a population of less than one million people will boldly chart a path forward. I am confident that Guyana’s future is bright with influential leaders like those represented on our panel here this evening. Leaders like Justice Simone Morris-Ramlall, whose passion and pursuit for justice led her to commence service at the Guyana Legal Aid Clinic, providing free or subsidized legal advice and representation, especially for those less advantaged. Today, she serves as a Puisne (pyo͞onē) Judge of the Supreme Court, upholding the balance of justice.

A journalist and the first woman elected to lead the 74-year-old Guyana Press Association, Nazima Raghubir said, “the advancement of women rights should not be seen as a partisan movement, this requires all to ensure that every girl is educated and every woman has the right to make decisions about herself and body.” As a leading journalist, Nazima embraces that philosophy in raising awareness on various social, political and economic issues and ensuring the citizenry is kept informed, thereby allowing them to hold government and democratic institutions accountable.

Young people are a country’s greatest asset and contribute to sustainable efforts in the long term. I am pleased to see the U.S. Embassy’s Youth Action Network managed by its first all-female Council under the leadership of Lauren Dundas. We continue to see positive returns when emerging leaders such, as you three, are committed to fulfilling their social responsibilities towards the development of their country by making positive contributions in their communities.

Thank you all for coming tonight.  I hope you enjoy the film we have selected to honor and celebrate the occasion.