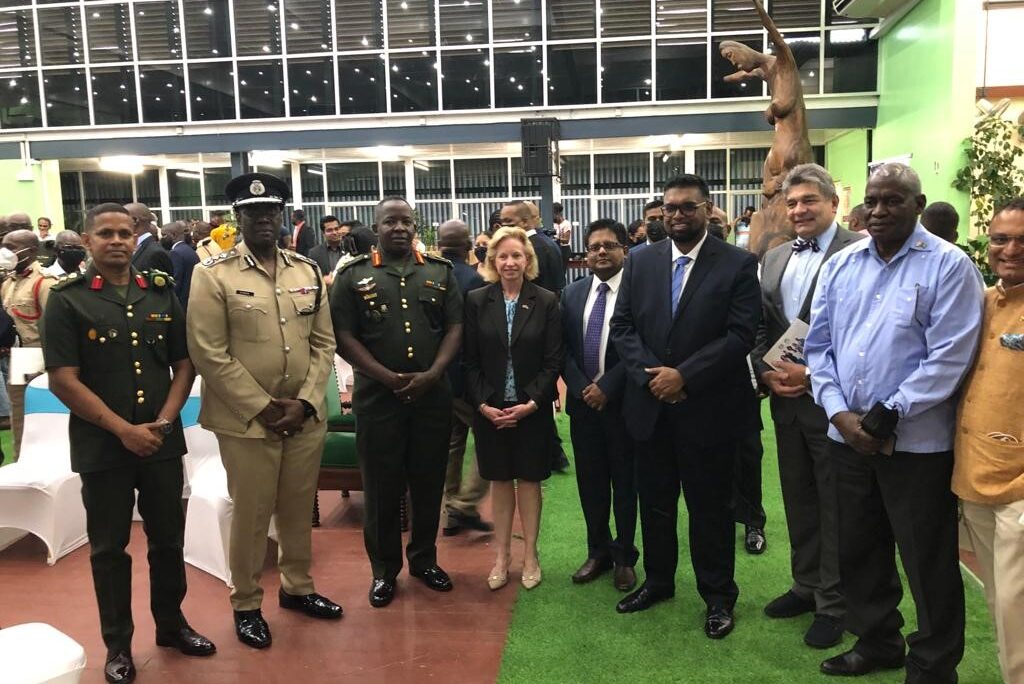 His Excellency President of the Cooperative Republic of Guyana Dr. Mohammad Irfaan Ali,
Vice Chancellor of the University of Guyana, Dr. Paloma Mohammed,
Colonel Khan from the National Intelligence and Security Agency,
Dr. Bitencourt from the Perry Center at the U.S. National Defence University,
Members of the Diplomatic Corps,
Distinguished guests,
Members of the Media,
Ladies and gentlemen,

I am very pleased to be here with you this afternoon, to recognize the beginning of yet another important program at the University of Guyana. In its nearly 60 years as Guyana’s flagship institution of higher learning, the University has been the bedrock of academic and professional growth for Guyana, and I know the leadership of the Vice Chancellor has more in store for Guyana’s transformational decade. The United States has been a partner to UG for many years, bringing Fulbright scholars and capacity building programs that are meant to bring the University to international levels of recognition.

This Master’s degree in Strategic Development is an especially remarkable initiative, because it’s not only important to Guyana’s transformation, but indeed for the region and beyond. I would like to recognize Capitan Gerry Gouveia who strongly supported this initiative and Colonel Khan who developed the curriculum, for their leadership in developing the next generation of leaders with an eye toward the importance of security. Their collaboration with other government institutions and programs is important and timely.  Guyana’s status as a democratic nation makes strategic development, with an eye on the threats to security, more critical than ever, as we stand today as witnesses to assaults on sovereignty and democracy in our world.  It has been two decades since our nations committed to promote and defend democracy across the region through the Inter-American Democratic Charter under the Organization of American States. Countries made this commitment not because they were pressured, or out of ideological conformity, but rather because several countries in the region had tried to deliver social and economic development through non-democratic systems and failed. And while there are some exceptions, on the whole democratic governments in the region have delivered a period of unprecedented prosperity, security, and stability.

But challenges remain, and the United States continues to be a partner in addressing all of them. There are three I would like to highlight. First is corruption, which as a daily reality for people all around the world, it’s estimated to cost up to 5% of global GDP. It stifles growth, it discourages investment, it deepens inequities. But maybe its greatest toll is on citizens’ trust in government. In fact, if you look at most broad-based civil uprisings around the world in recent years, you will find at their core a rejection of corruption with impunity.

In Guyana, we have helped build capacity of public institutions, like the GDF, the GPF, the GRA and justice sector to increase their transparency and accountability to Guyanese citizens. We also encourage the efforts of civil society organizations to hold its government to be responsive to their needs, accountable and transparent. The work of persons in the disabled community is particularly noteworthy. Their efforts have received notice from all levels of government, which will eventually help persons in that community have better access to employment, education, and physical access to public buildings and make positive and important contributions to their nation.

The second challenge is civilian security. Violence perpetuated by transnational criminal organizations and gangs contribute to waning faith in democratic institutions, suppress economic opportunities, and drive irregular migration.  Insecurity thrives in areas where democracies fail to deliver, leading to urban violence, trafficking in persons, exploitation, extortion, and illegal resource extraction that can destroy Indigenous lands and biospheres.  Regional partnerships, information-sharing, and enhanced border security for countries in the region can counter the spread of illicit networks, counter narcotics trafficking and terrorism, and bolster security for the entire Hemisphere.  Our collaboration on this issue has had success, but we need to do more. Our security cooperation includes a stronger than ever military to military cooperation, underscored by the excellent cooperation with Southern Command and the Florida National Guard, relationships that have endured for decades. The TradeWinds military exercise that Guyana hosted in 2021 demonstrated to the region that Guyana is a ready and willing partner, and has the political will, to bring enhanced security to the region. We also support Guyana’s efforts to join the Regional Security System, to contribute to regional peace and security. As Guyana continues to develop its security strategy, the United States is and remains a committed partner.

The third challenge is focusing our democracies to tackle the economic and social challenges that are facing our people. Now, this should be obvious, but the reality is we’ve often put more energy into strengthening civil and political rights, like free and fair elections, the rule of law, freedom of speech and assembly – and less into strengthening people’s economic and social rights, like bolstering labor standards, expanding access to adequate education and health, and providing more inclusive opportunities. People across our hemisphere are demanding that we do both, and the United States hears that call.

I’m happy to say on this note, we have a lot in common with Guyana. Our shared value of education is just one example. This Master’s program is an important initiative, and as education is a U.S. foreign policy priority, we will continue to collaborate with UG and other stakeholders involved in this program, to ensure its success in complementing the efforts to bring security, however defined, to all Guyanese. Thank you very much.