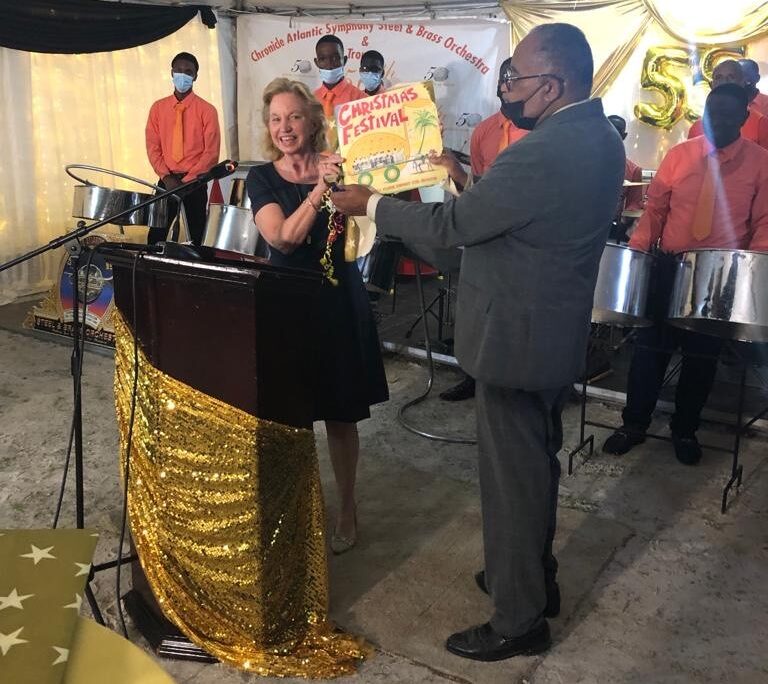 It is my distinct honor to be with you this evening for a trip down memory lane, and to hear some great music. Thank you to Wesley Kirton, Rudy Bishop, and all the members of the band here today for your vision then, and now, as to the power of music in bringing people together. I can’t wait to hear some of the tunes on these albums, but I think I’ll need some help finding a record player to make that happen. Do some of you in the audience not know what a record player is?

Anyway, I’m sure we all know what music means to us, as a community, and as partners and friends. This tour that happened way back in 1981, I understand was part of the life of this band whose story is really quite remarkable. Not only was it an award-winning steelpan band from the 1970’s, the addition of a dance troupe propelled them as cultural ambassadors all over South America, the Soviet Union, and finally North America, where I understand they visited legendary boxer Muhammed Ali in his home. The tour covered cities all over the United States and touched the hearts of Americans and Guyanese alike. And that is essence of an event like tonight, to remind us more about what unites us as friends and neighbors, more than what divides us. Celebrating music is a testament to its social power. Music brings artists and communities together in harmony, providing freedom of expression and inspiring innovation within a framework of rules agreed upon in advance, mirroring a democratic society.

The origin story of Jazz diplomacy in the U.S. emerged from the era of Cold War competition between the United States and the former Soviet Union. In a time of dangerous tensions and heightened propaganda, the State Department set out to connect American Jazz artists directly to international artists and foreign audiences to share this music, confront false narratives, and improve the public image of the United States in light of racial tension and inequality. Beginning in 1956, the State Department sent American artists and Jazz Ambassadors abroad – as it still does today – understanding that Jazz evolved from and mirrors the diverse and imperfect fibers of American life and democracy. The Jazz Ambassadors’ freedom and success while traveling abroad also focused the domestic lens of American society even further on the racial inequities that the same artists experienced at home, helping to usher in the Civil Rights era. The Jazz Ambassadors were to evoke the essential American values of tolerance, inclusion, freedom of expression, creativity, innovation, and respect for others by their example, not by their words.

It is my wish that we can all use the example of the Chronicle Atlantic Symphony Steel Orchestra in recognizing the boundless spirt that music and culture nourishes in all of us. The U.S. Embassy continues to support the arts through exchanges, supporting the rights of artists to protect their intellectual property, and providing grants and programs. As we celebrate the legacy of the past tonight, let us resolve to ensure the future of our cultural heritage has a rightful place in the development of our hemisphere. Thank you very much.