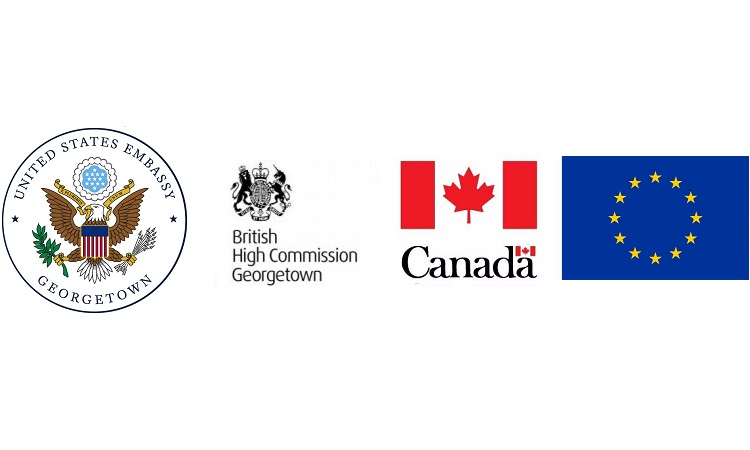 World Press Freedom Day gives us an opportunity to acknowledge the significant work of journalists, remind ourselves of the fundamental principles of press freedom and assess the current state of press freedom locally and around the world.

We recognise that media freedom is a cornerstone of democratic societies and essential to the protection of human rights, fundamental freedoms and universal values anchored in the Universal Declaration for Human Rights.

The media plays an essential role in our societies, defending and advancing the truth and amplifying the voices of the public by sharing stories authentically.

Journalists have been at the forefront in times of danger in Guyana, including during incidents such as fires and flooding and they tell the heart-breaking stories of women and families who have been victims of domestic violence.  Members of the media are a key source of information on national topics such as Guyana’s rapid development, while at the same time holding government, opposition, parliamentarians and others accountable.

Press attention to accountability has never been more important in Guyana with a historically large revenue stream entering government coffers and a regularly stated intent to use those resources for a development agenda that cuts across all regions and races.  There is also a larger principle at stake that strong democracies require free information flow in the public marketplace of opinions and ideas.  As inconvenient as criticism can be to government officials and other leaders, it is an essential part of the democratic cacophony.

For example, throughout the COVID-19 pandemic, the media has helped to keep societies updated about developments with the pandemic, to learn of best practices to prevent the spread of the virus and importantly to counter false or misleading information.

With matters of life and the quality of life in the balance, journalists must be allowed to report facts freely without attacks and acts of intimidation or censorship at a time where the capacity to speak truth is constantly under attack around the world. Media freedom also requires freedom from all forms of undue influence or pressure, be it political, economic or financial, so that they can report independently and objectively.

The abuse and harassment of journalists while doing their jobs must also not be tolerated.  Female journalists and members of the LGBTQ community are often victims of inappropriate comments and sexual harassment and that must end.

In a time where journalists are increasingly using a digital space, it is clear that bold action is needed from governments to acknowledge and address the evolving media environment. As the media continues to transform locally, the presence and voice of the Guyana Press Association is even more important, and we are also pleased to note Guyana’s membership in the Media Freedom Coalition.

Together, we must engage constructively to find practical solutions to protect the voices of journalists in both the traditional and digital space.

We thank journalists in Guyana for their continuous work which has not only informed but uplifted the voices of communities and we commit to continuing to support the local media and the fundamental principles of press freedom.