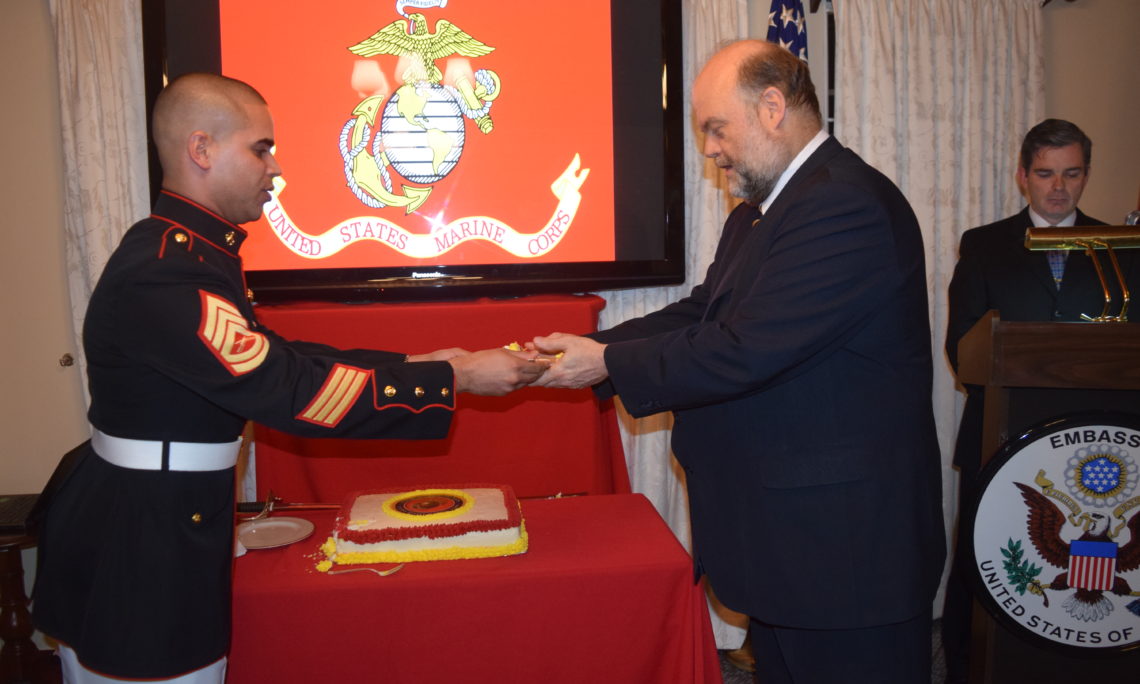 Happy Birthday to the United States Marine Corps!  I am delighted to be here this evening to honor and celebrate the achievements, dedication, and sacrifice of the Marines.  Thank you Terry for hosting this event, and Will and Gunny for bringing us together.

Each year on this day, Marines around the world, in embassies and consulates, gather to commemorate the anniversary of the founding of this unique American institution.  While we are grateful to the Marines every day, this day in particular, is an opportunity to express our appreciation for the Marines Corps, especially the Marines with us here tonight, from the youngest, Sergeant Tyler Hancock, to the oldest, Sergeant Kyle Sauls, and everyone in between, including our own Will Noone and Gunny Angel Rodriquez.

Throughout my 27-year career with the Foreign Service, I have had the pleasure of working at and visiting many posts.  There has always been one thing in common at all the locations and that is Marines standing tall at their post, keeping watch while we carry on with our daily tasks.  In Georgetown, we look forward to welcoming Gunny Rodriguez and his detachment to our team at the Embassy.  I am confident they will do a great job helping to protect our people, facilities, and information at post.

On the heels of the U.S. presidential election that will see the peaceful transition of power, which has become a trademark of our democracy, I reflect on the long and illustrious history of the United States of America.  Marines have always been there protecting and serving on the front lines of our country’s defense, while the citizens of our great nation continue to enjoy peace and liberty.

I would like to share a story about  a young Marine, injured in combat, with more tubes going in and out of his body than even hardened Marines had ever seen.  He couldn’t see very well, and it was hard for him to talk.  He reached up and grabbed the four stars of a visiting general’s uniform, just to make sure the visitor was who he said he was.  The Marine held the general’s hand with a firm grip.  He was making signals, and eventually, everyone in the room realized he wanted to tell the general something.

The visiting general put a pad of paper in the young Marine’s hand — the Marine wrote `Semper Fi.’  If you are Marine, or if like myself, you are an admirer of the Marines, you know those words are a battlecry, a greeting, and a legend in the Marine Corps.  They are Marine shorthand for the motto of the Corps – “Semper Fidelis” —  “always faithful.”  The general was a tough-as-nails Marine, but he still cried when he saw those words, and who can blame him.

Like that general, I too continue to be impressed by the selfless dedication of our Marines, many of whom are young men and women about the age of my own two children.

On behalf of a grateful embassy, I would like to thank the Marines for their dedication, professionalism, and service.  We warmly welcome you and the detachment that will very quickly now form here at the U.S. Embassy Georgetown.  I, and my wife Rosaura, also look forward to a Marine Corps Ball next year to celebrate your 242 years!   Semper Fi, and once again Happy Birthday to the United States Marine Corps.